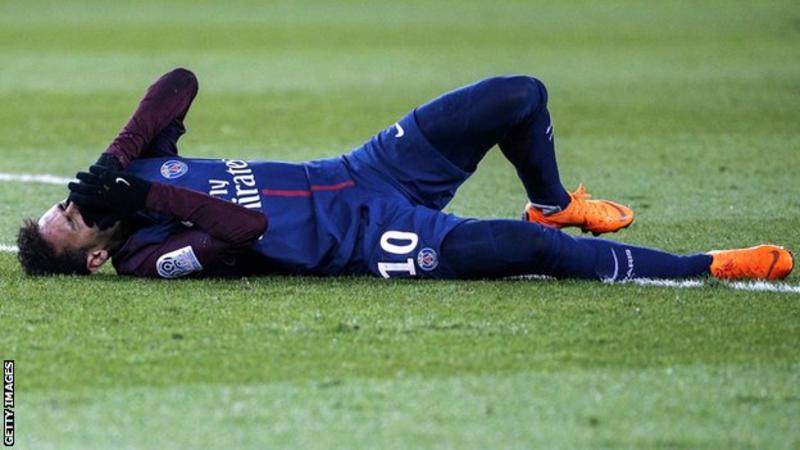 Paris St-Germain forward Neymar is set to miss the Champions League last-16 second-leg tie against Real Madrid after being diagnosed with a fractured metatarsal and a sprained ankle.

The Brazilian, 26, was injured during Sunday’s Ligue 1 win over Marseille.

Neymar joined PSG for a world record £200m fee from Barcelona last August and has scored 29 goals in 30 games.

PSG did not provide a timeline for Neymar’s return, but the injury typically requires a minimum of one month on the sidelines — essentially confirming he will not be able to take part in PSG’s bid for Champions League revenge against the Blancos.

Unai Emery’s men trail 3-1 from the first leg of their last 16 clash, despite taking the lead at the Santiago Bernabeu through Adrien Rabiot’s early goal.

And the news that their Brazilian talisman is missing comes as a massive blow as they seek to make the quarter-finals in a game scheduled for March 6 at Parc des Princes.

On Sunday, Emery had voiced his hopes that the world’s most expensive player would make it back in time for the blockbuster clash.

“The first exams reveal a twist,” Emery said. “We’re going to do some extra medical tests.

PSG are 14 points clear of second-placed Monaco in the league and on 6 March will host Champions League holders Real Madrid, trailing 3-1 from the first leg.