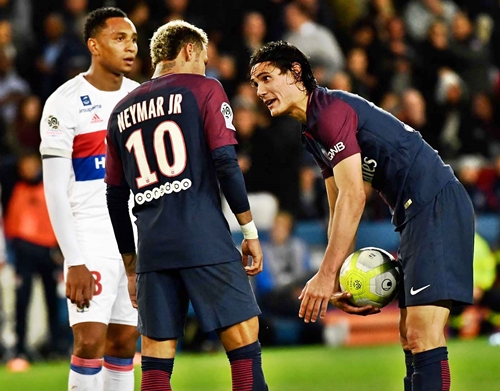 According to Spanish newspaper, Marca.com, French Ligue 1 giants, Paris Saint-Germain, have decided the fate of its two star strikers, Edinson Cavani and Neymar over who should take free-kicks and penalties for the club.
This drastic decision came as a result of bells of alarms that were ringing throughout the French capital on Sunday evening as Cavani and Neymar squabbled over who should take a penalty against Olympique Lyon.
PSG had hoped the issue could be resolved between the two individuals but the story has since taken on a life of its own on social media.
Read Also: NEYMAR ASKS PSG TO SELL CAVANI AFTER FREE-KICK ROW
The club have now been forced to make a decision of their own on the matter, after rumours of Neymar ‘unfollowing’ the former Napoli forward quickly appeared.
The Parisians have now decided that the Uruguayan International, Cavani will remain the club’s penalty taker.
Neymar’s 222 million euro arrival looked to have shifted the balance of power at the Parc des Princes.
It was gathered that on Monday, the club President, Nasser Al-Khelaifi met with both players in question to discuss the issue.
Further meetings with Unai Emery and Antero Henrique are scheduled for Wednesday.
Neymar vs Cavani: PSG Announces Club’s Penalty Taker After Players’ Fight was last modified: September 21st, 2017 by Arinze Ago