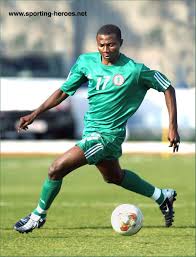 The NFF sent the birthday wishes on their verified Twitter handle on Monday.

“Happy birthday Julius Aghahowa. Have a good one,” the NFF wrote.

Aghahowa made his Super Eagles debut in 2000 and went on to make 32 appearances, scoring 14 goals.

He featured for Nigeria at the 2002 FIFA World Cup in Korea/Japan where he scored Nigeria’s only goal in the tournament in their 2-1 group loss to Sweden.

Also, he represented Nigeria at the 1999 FIFA U-20 World Cup on home soil and the 2000 Sydney Olympics in Australia.

And at club level, he played for Bendel Insurance, Esperance of Tunisia, Shakhtar Donetsk, Wigan Athletic and Kayserispor.