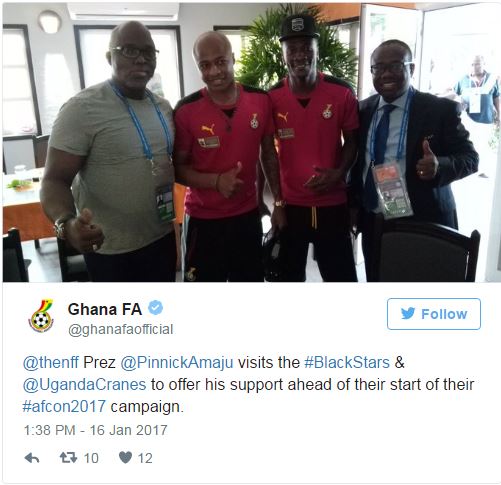 Nigeria Football Federation NFF president, Amaju Pinnick has displayed support for the Black Stars of Ghana in their 2017 Africa Cup of Nations campaign after the Super Eagles of Nigeria failed to qualify for the ongoing tournament.

The Black Stars who are gunning for a fifth African title will begin their campaign against Uganda at the Stade de Port-Gentil on Tuesday.

And Pinnick whose administration has seen the Nigeria senior national team miss two Afcon tournaments seems to be rooting for Ghana to emerge as champions.

He paid a courtesy call to the Black Stars’ camp on Monday afternoon ahead of their clash with the Cranes in Port-Gentil.

“@thenff Prez @PinnickAmaju visits the #BlackStars & @UgandaCranes to offer his support ahead of their start of their #afcon2017 campaign,” the Ghana FA tweeted before it was yanked off.