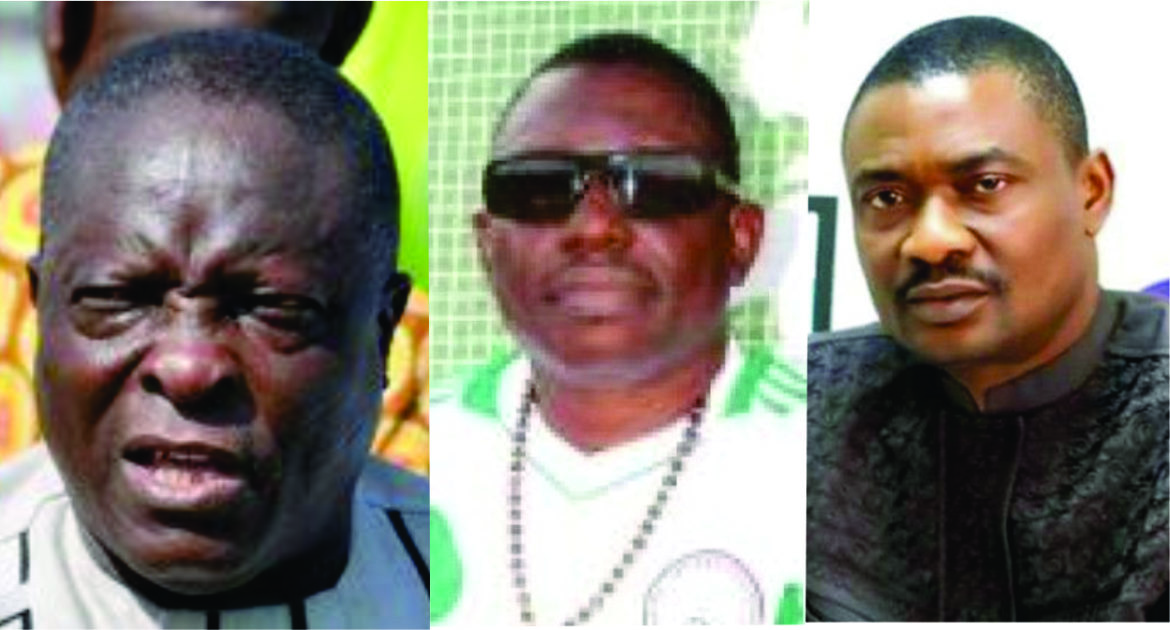 Baring last minute changes,two separate football supporters club will be in Russia 2018 world cup to cheer the Super Eagles up whenever they are called to duty. This is as a result of the creation of Nigeria Eagles Supporters Club by an estranged member of (NFSC)  Prince Vincent Okumagba..

Recall that  for many years now, leadership crisis has rocked the Nigeria football supporters club. After volume of agitations that the founder Dr Rafiu Ladipo  should resign and relinquish his position as the President -General of the body,  two elections were organized  at two different locations Lagos and  Abuja and it produced two different men who were laying claims to the chairmanship  of the body.

Dr Rafiu Ladipo was promoted to the rank of President-General of NFSC whilst Rev Samuel Ikpea emerged as the national chaiman, in the Lagos election while  the second election held in Abuja produced Vincent Okumagba as the national president.Since then the body has been experiencing leadership tussle between Dr Rafiu Ladipo and Rev Ikpea who emerged in Lagos election on the one hand and VincentOkumagba who emerged in Abuja  on the other.

In order to gain relevance and make their presence felt at Russia 2018 world Cup, the Okumagba faction has metamorphosed into a new brand in Nigeria football supportership, when Vincent Okumagba created  his own version  named  Nigeria Eagles Supporters Club (NESC) thereby dissociating himself and his members from Dr Rafiu Ladipo -led Nigeria Football Supporters Club (NFSC).

However , this event didn’t go down well with Dr Rafiu Ladipo and he went to court to challenge  and restrain the creation of another supporters’ club in the country since there is an existing one.

The Nigeria Football Supporters Club went to court to seek an order of perpetual injunction restraining thenewly established  Eagles supporters club from parading themselves or operating as a supporters club in the country.

Justice John Tsoho of the Federal High Court, Abuja, on Friday refused to grant a restraining order barring the Nigeria Eagles Supporters Club from parading themselves as a supporters club in the country.

The Nigeria Football Supporters Club, the applicant, had filed an ex parte motion but the judge, Justice Tsoho refused to grant the order and asked the club to notify the eagles supporters of the suit.

The applicant then put the Eagles supporters club on notice and asked for an order of perpetual injunction restraining them from parading or purporting to be the Nigeria Eagles Supporters Club. The applicant also asked for an order for interim suspension of the incorporation of the Nigeria Eagles Supporters Club by the Corporate Affairs Commission, the second respondent in the suit. Justice Tsoho in his ruling, struck out the motion saying that the first relief sought was bereft of logic. He said: “Having considered affidavit evidence and arguments of all counsel, I hold the view that the applicant’s application is not sustained, and it is therefore struck out. “Prayer one as couched by the applicant, is no doubt bereft of logic.” The judge said that by the averments in the affidavit in support of the motion, the applicant failed to prevent the complained anomaly and could therefore not hold anyone responsible.

The judge added that the second relief sought by the applicant was already a completed act as the Eagles supporters had already been registered and incorporated by the CAC.

He said: “The law is trite that already done or completed acts or events cannot be restrained; prayer two is not grantable as the act sought to be restrained is already completed.” Justice Tsoho opined that the alternative was for the applicant to seek nullification of the incorporation of the eagles supporters.

Good morning ladies and gentlemen of this great house ,  I woke up this morning to see what had been trending on social media with regards to the judgement of yesterday at the federal high court Abuja . It’s common knowledge to every sports lover in Nigeria that supporters club has been in crisis for so many years now , Dr ladipo has repeatedly claimed to have registered NFSC and that only death can force him to relinquish power . After due consultations we decided to follow the part of countries like Ghana that has more than 4 supporters club . We then applied to  CAC to register Nigeria Eagles Supporters Club (NFSC) as incorporated trustees .

Shortly after registration we thought the war had ended only for us to receive a court summons where ladipo and his men went to court against the Eagles supporters club . Thankfully the court has struck out the case as per Justice Tosho’s  judgement.

For Russia 2018 , the Eagles Supporters club under my leadership have secured 235 fan ids for my members for the World Cup . The Super Eagles are in for a swell time in Russia as we are planning to support them massively at  the World Cup where we believe they are capable of putting smiles on our faces .

Eagles supporters club belongs to all Nigerians , members of the board cuts across the 4 geo political zone of the country. It’s not a personal club rather it’s  a club for everyone where position is not decided upon ethnic lining.

‘’I Samuel Ikpea the duly elected National Chairman of Nigeria Football Supporter’s Club do welcome the baby  Nigerian Eagles Supporters Club on board. So, today I thank the Almighty God that the world now know, that there is No faction in the supporters club. Dr. Rafiu Oladipo still remains an icon to be respected and recongized not only in the Nigeria football supporters club, but in the world of football and other sports. We have won both  FIFA and CAF best behaved and entertaining supporters club in the world for the country. Watch out for us at the World Cup, Russia 2018’’.He concluded.

However, as at the time of filing this reports, efforts are being made by the Amaju Pinnick -led Nigeria Football Federation (NFF) and other stakeholders in sports and football to reconcile and unite the warring parties, all in a bid to ensure that Nigeria  presents a supporters club under one particular umbrella.