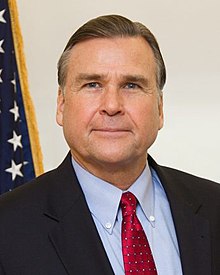 The United States of America’s Ambassador to Nigeria, William Stuart Symington, says Nigeria is an idea.

The ambassador stated this during the July 4 independence day celebration of the US in Nigeria.

Continuing, he stated, “And here’s the idea of Nigeria: the idea of Nigeria is that you maintain 500 tribes. I am not making that number up. Five hundred languages…put them in a place and by the grace of God, get them to think of themselves as one nation bound in freedom, peace, and unity. This is no easy task.”

According to him, the American people have continued to work hard to maintain peace and unity in their country.

He, thus, urged Nigerians to strive towards achieving unity and peace.

Nigeria’s independence will be celebrated on October 1.

“We in the United States have been after unity, freedom, and liberty, since long before the song was written in 1812 and we celebrate that tonight,” Symington noted.

According to him, it is important that Nigerians from various ethnic tribes, geopolitical zones and religious beliefs to care for one another.

He noted: “This is the greatest challenge the world faces today and I am convinced we’ve got the answer. Now, if you’re not from the United States. Many Americans have said and many Nigerians have said it but here’s the challenge: (John F. Kenndy) Think not of what your country can do for you, but for what you can do for each other, for your country and for your loved ones.

“This is Nigeria’s challenge. This is the idea of Nigeria. It’s also the idea of the United States. Thank you for coming to celebrate this idea. We all have a right to live and to unite in freedom and prosperity and justice for all. Thank you.”

‘Nigeria Is An Idea’ – US Amb., William Symington was last modified: July 9th, 2019 by Damilare Salami

Will Remain as Senate President If Atiku...