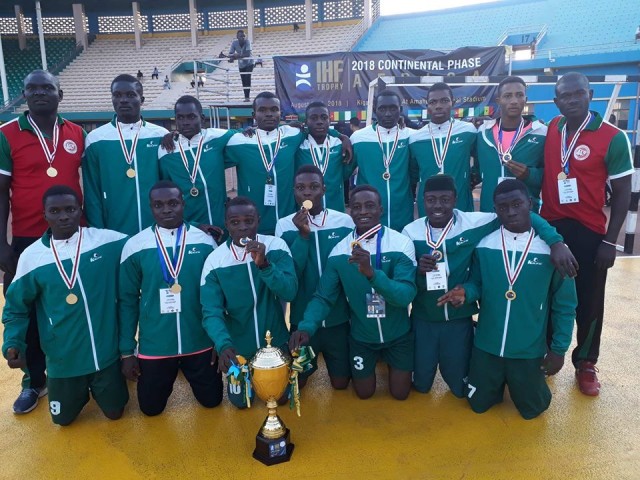 Under 18 and 20 males handball national teams emerged champions in the just concluded continental championship in Kigali the capital city of Rwanda.

In the under 18 category team Nigeria trashed their Guinea counterparts by 45-31 points while in the under 20 category Nigeria beats DR Congo with 27-26 points in the final matches they played today (Sunday).

With this development, both teams qualified to junior nations cup in Morocco and IHF intercontinental championship later before the year rounded up.

In his congratulatory message to the players and officials of the teams, the president of the handball federation of Nigeria, Mr. Samuel Ocheho commended them for making Nigeria proud.

Mr. Samuel Ocheho said the victory is a reward for hard work and determination on the part of players, technical crew and a collective efforts by the board members of the federation.

At the inception of our board in the last one year,we promised Nigerian not judge us on short run results but long run,we thanked God for the achievements we recorded so far and its encouraging, Mr. Ocheho said.

He maintained that his board would remain focus in doing everything humanly possible to move handball forward in the country.

The President thanked the Federal ministry of youths and sports, handball stakeholders in the country for their support and co operation to his board since they came on board and hope the tempo would be sustained.

Nigeria Overcome Africa in U-18, U-20 Africa Handball Championship In Kigali was last modified: August 13th, 2018 by Damilare Salami