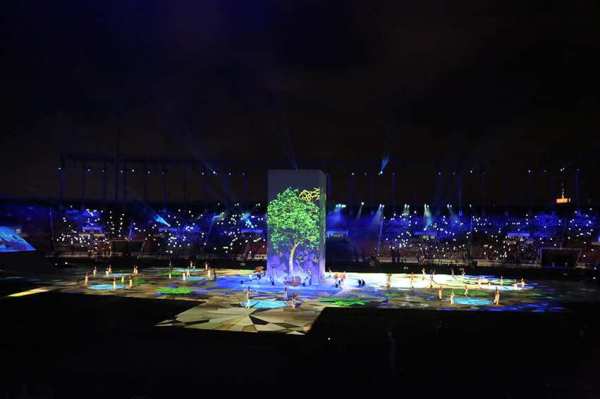 Africa’s version of the Olympic Games tagged the All African Games has officially commenced in Rabat, Morocco.

The Opening Ceremony of the 12th African Games was held Monday night at the Prince Moulay Abdellah stadium.

As expected, at the colourful ceremony, all the participating countries had a march past to showcase their contingent as well as a bit of their culture.

Also, a former member of the House of Representatives and head of Nigeria Football Federation (NFF) Women Football Committee, Ayo Omidiran, was in attendance.

Nigeria has the second-largest contingent of 427 athletes and officials. The Nigerian team is led by table tennis legend Segun Toriola.

This will be the first time that the African Games will be hosted by Morocco following the country’s readmission to the African Union.

With more than 7,000 athletes from 54 nations expected in Rabat, this is also the largest ever African Games.

The Games unofficially commenced last Friday with some team events such as football, volleyball and judo. Some events have even been concluded and medals awarded.

Already, the traditional medal table-topper, Egypt, is ahead following a pre-opening ceremony haul of four gold and four silver medals.

Other countries already on the medals’ table are Morocco, Algeria, Tunisia, Gabon, and Cameroon.

The more than 7,000 athletes will participate across 26 sports, while the competition will end on August 31.

Some events will also serve as qualifying tournaments for the Tokyo 2020 Olympics.

Others in which competitors also aim for places at the Olympics are table tennis, fencing, sports shooting, archery, badminton, and triathlon.

Egypt will be gunning to top the overall medal table for the sixth time in Rabat, having done so for the fifth time at the 2015 edition in Brazzaville after claiming 85 gold, 63 silver, and 68 bronze medals.

Nigeria Set To Shine As 12th All African Games Commences In Morocco was last modified: August 20th, 2019 by Damilare Salami