Nigeria Vs Argentina Match Kicks Off by 5pm 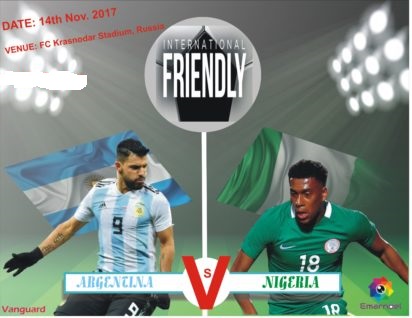 Officials have confirmed that tomorrow’s friendly match between Nigeria and Argentina will kick off by 5pm Nigerian time. Officials have also confirmed skipper Mikel Obi will return to the Eagles starting XI after he was rested for Friday’s game in Algeria.
“The game will start at 7pm local time, which is 5pm in Nigeria,” Eagles spokesman Toyin Ibitoye informed.
It was further gathered that skipper Mikel who was left out of the final World cup qualifier in Algeria on Friday, will return to the starting XI against Argentina on Tuesday.
The Eagles arrived Russia via chartered flight on Saturday from Algeria.
Weather conditions are similar to the cold the team encountered in Constantine, Algeria – lowest 6-9 degrees and warmest 17-19 degrees.
Organisers say there will be maximum changes of six players per team for this match.
Nigeria Vs Argentina Match Kicks Off by 5pm was last modified: November 13th, 2017 by Arinze Ago

How Saudi Arabia Grants Citizenship to a Female Robot, Sophia