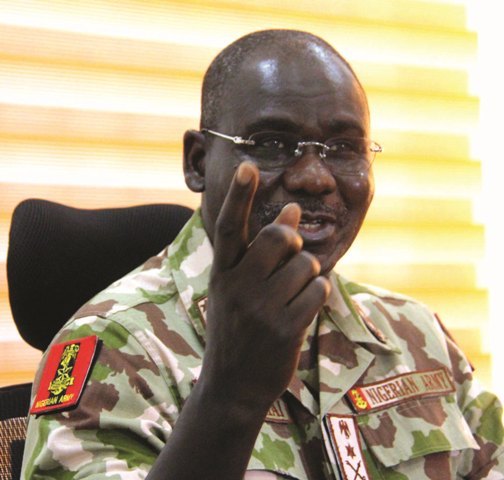 Barely 11 days to the long awaited 2019 general elections, the Nigerian Army has declared war on the proscribed Indigenous People of Biafra, IPOB, and its splinter groups in the South-East to forestall any crisis that could prevent a smooth conduct of the elections across the federation.

Chief of Army Staff, Lt. Gen. Tukur Yusuf Buratai, who made this declaration at the Chief of Army Staff Operations Conference with General Officers Commanding and commanders in Abuja, also pledged to protect the over 19 years unbroken democratic dispensation in Nigeria.

Buratai said that the activities of IPOB and other splinter groups in the South-Eastern part of the country were gaining momentum, as the group was threatening to disrupt the 2019 electoral process, ordering that their excesses must therefore be clamped down immediately.

He further said that the political clashes in Taraba State and a few other states called for enhanced liaison between commanders, the Nigeria Police and other security agencies in order to de-escalate tension in the areas as quickly as possible.

The COAS also threatened to deal decisively with any groups collaborating with foreign elements to disrupt the elections.
“Let me at this point state that we have information of subversive motives by some unpatriotic groups aided by foreign conspirators to scuttle the peaceful conduct of the 2019 general elections in some parts of the country.

We hereby warn such detractors to immediately mend their ways,” he said.
Buratai said the Nigerian Army was working closely with the Nigeria Police and other security agencies to ensure an enabling environment for the good citizens of the country to exercise their civic rights, warning that GOCs and field commanders at all levels were to deal decisively with any form of security breach.

He said the army’s role in support of the nation’s democracy could not be over-emphasised; hence the conference would provide the opportunity to review the conduct of Exercise Egwu Eke III as well as appraise the preparations so far being made by various formations towards the smooth execution of Operation Safe Conduct before, during and after the 2019 general elections.
“The conference will also afford us the opportunity to review recent events in Operation Lafiya Dole and deliberate on how best to address some of the operational, tactical and administrative lapses.

It is expected that this conference will proffer solutions to some of the challenges in the theatre of operation with a view to stimulating and driving added impetus to the overall conduct of the operation,” he explained.
He noted that the task of providing security during elections comes at a time when the Nigerian Army was still engaged in asymmetric operations across the country against terrorists, bandits and other criminal elements.

Buratai further explained that the task before the army was a critical one that required effective balance of expertise to efficiently utilise the service’s manpower and resources to ensure that it met the aspirations of Nigerians and indeed the great nation.

Earlier in his address of welcome at the occasion, the Chief of Policy and Plans, Nigerian Army, Major General Ali Nani said that the conference was apt, especially at a time when the citizens the country would once again exercise their civic rights of electing their leaders through the electoral process.

He, therefore, charged commanders to discharge their duties in accordance with constitutional provisions and military rule of engagement.