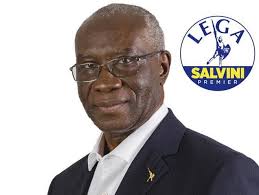 Toni Iwobi of Spirano in Lombardy who belongs to the anti-immigration League is the first black to be so elected in the history of Italy. Iwobi, announced “with great emotion” on his Facebook page that he had been elected to the senate in Italy’s general election.

“After more than 25 years of fighting as part of the League’s big family, I’m about to start another great adventure,” Iwobi wrote, going on to thank leader Matteo Salvini and his other fellow party members.

“I’m ready, friends,” Iwobi said. Iwobi, 62, was born in Nigeria and came to Italy on a student visa some 40 years ago, before going on to marry an Italian woman and start his own IT company here.

Campaigning with the slogan “Stop Invasion”, Iwobi said his concern isn’t just for Italians but for migrants, who the League claims it prefers to help “in their own home” rather than in Italy  though its “Italians First” programme contains few proposals for international development aid.

Despite being one of very few black members of the League, whose leader has made many inflammatory remarks about non-Italians and Muslims, Iwobi insists that the party isn’t racist. “Racism means thinking yourself better than others, while in the movement I find many firm positions, but also a lot of respect,” he told the Corriere della Sera.

He was quick to defend fellow party member Attilio Fontana, who caused outrage during the campaign by saying that immigration to Italy threatened the survival of “our white race”.

“Where’s the problem,” Iwobi asked, claiming that Fontana had simply been referring to Italian “culture”.  Fontana went on to win his campaign to become president of Lombardy, Italy’s most populous region, by a margin of 20 percent.

Before running for senator he represented the League as a municipal councillor in Spirano back in the 1990s, and more recently headed Salvini’s national committee on immigration.

In that capacity, he helped write the League’s anti-migration platform, in which it proposed among other things to make it easier to deport migrants, to use economic incentives to get countries to agree to repatriate their nationals from Italy, to refuse to take in migrants rescued by NGOs from the Mediterranean, to renegotiate EU agreements that oblige Italy to house migrants that arrive here while their application to stay is processed, to threaten withdrawal of the right to seek asylum or benefits if migrants commit a crime or break the rules of the reception centre where they’re housed, and to stiffen existing requirements for the children of immigrants applying for citizenship to include a test on Italian “language, culture and traditions”.