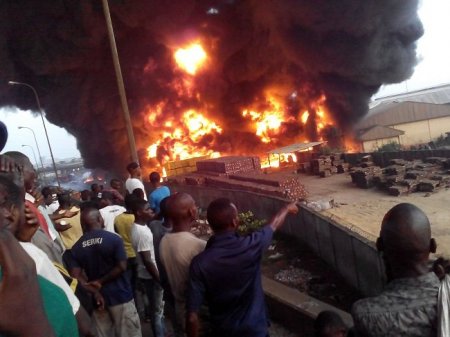 A huge fire outbreak occurred in the early hours of Sunday, December 25, 2016 at the premises of the Nigerian Breweries Plc in Iganmu, Lagos State. The cause of the fire has not yet been ascertained but the company has released a statement saying everything is under control.

The press statement after the cut and also a video of the incident.

There was a fire outbreak today at the empty bottle compound of the Lagos plant of Nigerian Breweries Plc in Iganmu, Lagos.

The fire which started early in the morning has been put under control by men of the Lagos State Fire Service supported by the Brewery fire team and other nearby corporate organisations.

There were no injuries or fatalities arising from the fire. Only empty bottles, plastic crates and some sections of the bottle holding bay were impacted by the fire. Brewery operations were not disrupted by the incidence.

We thank all stakeholders who have called to clarify or support the Lagos Brewery at this time.