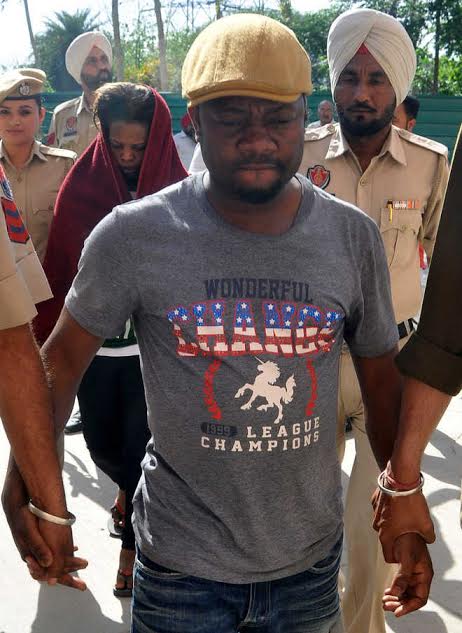 India police have arrested a Nigerian national and his Ugandan girlfriend and recovered 1 kg of heroin, worth around Rs 5 crore, from their possession.

The Nigerian suspect simply identified as Neubuz and Helen from Uganda were nabbed on Tuesday, March 28th,  following the arrest of three persons, including two women, from whom the police had recovered 500 gm of heroin, worth Rs 2.5 crore, two days ago.

“During interrogation, the trio had stated that they had procured the heroin from the Nigerian national and his friend, both putting up in Delhi,” said Mohali Senior Superintendent of Police Kuldeep Singh Chahal.The Mohali CIA wing conducted a raid on their rented accommodation in Delhi and nabbed them with the booty. The police said earlier both accused had visited India in 2011 on a tourist visa for three months.

“They again came here last month on a six-month tourist visa. The accused posed as cloth merchants, but were drug peddlers,” said the SSP.

During preliminary interrogation, the foreign nationals said they used to get the drug from another Nigerian national, staying in Noida.

“Investigations are on in this regard,” said the police.

Both accused were produced before a local court on Wednesday, March 29th, which remanded them in five-day police custody.  A case has been registered under Sections 21, 22, 25, 61 and 85 of the NDPS Act at the Mataur police station.

Nigerian man and his Ugandan girlfriend arrested with 1kg of heroin in India was last modified: March 30th, 2017 by Reporter