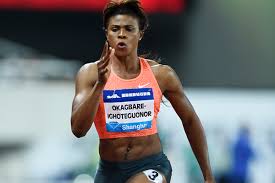 Nigeria’s sprint queen Blessing Okagbare-Ighoteguonor on Saturday, March 25 set a new African record in the 200m event ahead of the 2018 Commonwealth Games.

Okagbare set the new record at the Wes Kittley Invitational at the Abilene Christian University in Abilene, Texas, USA.

The 29-year-old set the new record with a time of 22.04 seconds to erase the record of compatriot Mary Onyali who had held the record with 22.07 seconds set at the Wetklasse Grand Prix in Zurich, Switzerland, 22 years ago.

Cierra White came second with a time 23.26secs while Natasha McDonald claimed the third position with a time of 24.23secs.

Okagbare’s former personal best in the 200m event was at the 2014 Eugene Diamond Leaguewhere she ran 22.23secs.

It was Okagbare’s first outing in 2018 and the reigning Commonwealth champion will be part of Nigeria’s contingent to the 2018 Commonwealth Games in Gold Coast, Australia.

Not only did Okagbare break the African record, but she also achieved the fastest time in the 200m event in 2018.

Okagbare who was not among the Nigeria athletes that returned empty handed from the indoor championship in England, will now set her sights on defending her 100 and 200m Gold at the 2018 Commonwealth Games.