Nigerian Who Carried Out US Biggest Tax Fraud Jailed, Was Building $6m Hotel In Nigeria 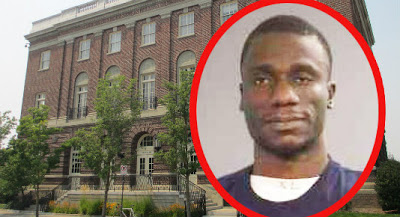 Emmanuel Kazeem, a Nigerian who masterminded a conspiracy to obtain millions in refunds from the Internal Revenue Service has been sentenced in Oregon to 15 years in federal prison.

Kazeem, 35, who also lived in Bowie, Maryland, was sentenced in Eugene, after a Medford resident helped spark an extensive investigation into the man’s massive fraud operation.

The Oregon judge sentenced a Nigerian man to 15 years in prison on Thursday for a “vast conspiracy” of identity theft and tax fraud, according to the U.S. Attorney’s Office.

The U.S. Attorney’s Office said that Kazeem was buying personal information (including social security numbers and dates of birth) in order to fraudulently file thousands of tax returns on behalf of unwitting victims.

“Emmanuel Kazeem orchestrated one of the largest tax fraud schemes in our nation’s history. The complexity of this case and the incredible effort by law enforcement to bring those responsible to justice cannot be understated,” said Billy J. Williams, U.S. Attorney for the District of Oregon.

Then, between 2012 and 2015, Kazeem and his co-conspirators filed over 10,000 fraudulent tax returns in an attempt to get over $91 million in refunds.

Not all of the fake returns were successful—but out of a possible $91 million, Kazeem and his crew still managed to receive more than $11.6 million in refunds.

In 2013, a woman in Medford realized that someone had filed false tax returns on behalf of her and her husband. She notified the Internal Revenue Service (IRS), sparking the investigation that would eventually net Kazeem.

“I want to remind everyone that this case began when vigilant Oregonians notified the IRS when fraudulently tax returns were filed in their names. It only takes one tip to make a difference and bring down a complex criminal organization,” said U.S. Attorney Williams.

Meanwhile, Kazeem reportedly purchased a $175,000 townhouse and put a $200,000 down payment on a brand new home in Maryland.

He also attempted to develop a $6 million 4-star hotel in Nigeria.

Federal agents descended on Kazeem in May of 2015, finding that the Nigerian man had also engaged in marriage fraud in order to stay in the country after entering on a student visa.

In addition to serving a 15-year prison sentence, Kazeem has been ordered to pay more than $12 million in restitution, and will be subject to deportation as soon as he is released from prison

Nigerian Who Carried Out US Biggest Tax Fraud Jailed, Was Building $6m Hotel In Nigeria was last modified: June 23rd, 2018 by Reporter