Nigerian Wrestling Champion, Power Uti Arrested Over the Controversial Death of His Wife 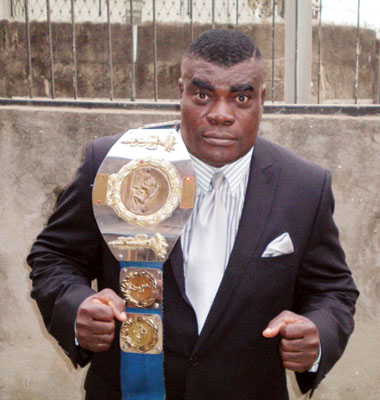 Nigerian wrestling champion, Power Uti has been arrested following the controversial death of his wife, Toyin in their Ilupeju Lagos home.
According to the Police Public Relations Officer, Famous Cole who confirmed the story on Wednesday said that Power Uti, has been remanded at the Ilupeju Police station and would be transferred to the Criminal Investigative Department, Panti in Lagos tomorrow (today).
In a report by Vanguard, it was gathered that the body of the deceased was first discovered by Power Uti on Monday morning, who, instead of taking her to the hospital, went to a church to seek spiritual help.
The deceased was 38 years old and a mother of four children who are under the ages of nine. She was unemployed and had been married for 10 years until her demise. Her body has been deposited at the Isolo general hospital, while her four children have been placed under the care of  her mother,.
It was learnt last night from multiple sources that the death has caused great shock in the Ilupeju area, as Power Uti is a popular personality, given his sporting prowess.
Nigerian Wrestling Champion, Power Uti Arrested Over the Controversial Death of His Wife was last modified: October 12th, 2017 by Arinze Ago