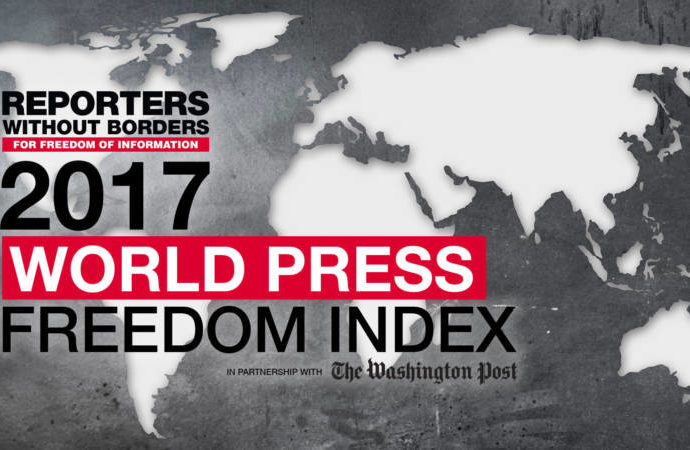 Amid growing concern over press freedom, Nigeria yet again recorded a fall on the international press freedom index on Wednesday.

According to the Press Freedom Index, released Wednesday by Reporters Without Borders, RWB, Nigeria ranked 122 out of 180 countries examined.

Norway, the report said, remains the country with the best press freedom in the world.

It was closely followed by Sweden and Finland, ranked second and third on the index, respectively.

In 2017, the country recorded another fall, moving from 116 to 122, which placed it conveniently on the red-zone for press freedom across the world.

According to the RWB, “In Nigeria, it is nearly impossible to cover stories involving politics, terrorism, or financial embezzlement. Journalists are often threatened, subjected to physical violence, or denied access to information by government officials, police, and sometimes the public itself.

“The all-powerful regional governors are often their most determined persecutors. As Africa’s most populous nation, Nigeria nonetheless has more than 100 independent media outlets.

“Online freedom was recently curbed by a cyber-crime law that punishes bloggers in an arbitrary manner.”

Syria, Turkmenistan, Eritrea and North Korea are the worst countries on the index, placed on the 177th, 178th, 179th, and 180th positions respectively.

RSF said in 2017 alone, eight journalists have been killed across the world, while 193 are currently imprisoned.

None of the journalist killed, however, was from Nigeria.

The report came amid growing concerns over press freedom in Nigeria, following the expulsion of the state house correspondent of PUNCH, Lekan Adetayo, from the presidential villa on Monday.

Mr. Adetayo, expelled over a story about President Muhammadu Buhari’s alleged ill-health, has since been recalled.

But the development has thrown up concerns over freedom of the press, prompting a Nigerian newspaper, The Guardian, to attribute the expulsion to President Muhammadu Buhari’s anti-press tendencies.

But Garba Shehu, presidential spokesperson, in reaction to the Guardian Newspaper’s headline report entitled “Memories of Decree 4”, had since dismissed the insinuation.

Mr. Shehu, reacting on Tuesday, said it was wrong and improper to use the isolated incident to judge the character of the president as if he was responsible for what happened.

According to him, the president has not and would never approve the oppression and humiliation of any journalist in the course of carrying out their legitimate duties.

Pre wedding photos of Ahmed Musa and his new wife