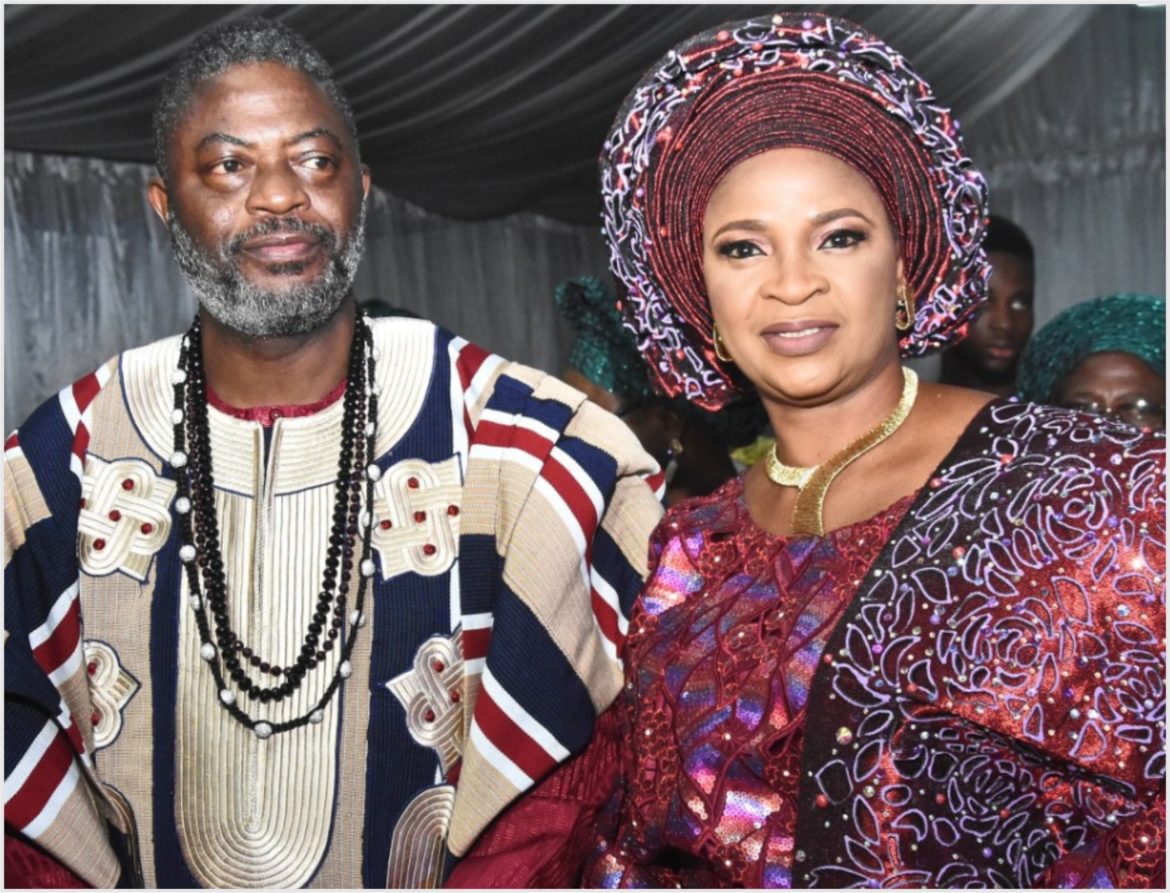 On Saturday 19th October 2019, two prominent families threw a talk of the town wedding for their children. It was a day to always remember for the families of Asiwaju Bisi, Yeye Asiwaju Abosede Adegbuyi and Mr Ademuyiwa & Mrs Modupeola Pitan. The Yellow and green wedding theme took place at The Elevation Church in Lekki for the solemnization of Holy Matrimony while the reception took place at Queens Park Event Centre, Victoria Island Lagos.

The wedding was between Adebola Adetayo the daughter of NIPOST boss, Barr. Bisi Adegbuyi and Adebola Abimbola, the son of Mr Ademuyiwa Pitan.

The party was had an array of Senators, Honourables, Obas, top socialites in Nigeria and distinguished personalities all over the world in attendance. We noted over 500 society women at the party, the party was not just crowded, it was filled with notable personalities. The bride’s father who is a prominent person in Ogun State got the full support from former Ogun State Governor Senator Ibikunle Amosun and his pretty wife as they graced the occasion right from the church service to the reception. These two families left no stone unturned to make sure the event turned out successfully and we can categorically tell you that it was a great success. The colourful wedding will always remain on the lips of many as it was attended by celebrities all over Nigeria. We are not wrong to call it a “Star-Studded Wedding”

The decorations were exquisite and irresistible. Did we tell you that all the parking spaces were filled with exotic cars? City People Society Reporter, Toyin Ogundiya brings you details of the classy and exclusive party.

The groom’s family were fully prepared for the special day. They danced into the hall with so much joy and energy. The groom’s mother got full support from her friends as they joined her on the dance floor. The groom’s mother was gorgeously dressed in a beautiful burgundy wine HoH lace. Her gele which was made from a luxury aso-oke was fully embellished with crystals, beads stones and other beautiful elements. One couldn’t help but admire her beautiful 18 carat Gold which is also one of the latest editions. What about her shoe and bag? They complimented her outfit.

The bride’s family were overjoyed to witness their daughter’s big day. Of course, it is every parent’s prayer to see their children get married and we can categorically tell you that the event was one of its kind.

The bride’s parents are indeed fashionistas. Just like the groom’s mother, the bride’s mother also rocked a beautiful burgundy wine. HOH lace, matching it with a luxury gele which was made from a luxury aso-oke and was fully embellished with crystals, beads and stones. The bride’s father was also not left out. He wore a luxury multi-coloured Agbada and under the agbada is a wine expensive fabric. His Agbada was beautifully designed and he complimented his outfit with a black designer shoe.

AT THE HIGH TABLE

This lovely couple is indeed a show stopper, they stole the show at their own wedding. Guests couldn’t help but admire them as they made a lovely entry into the hall. We can also say that they danced into the hall in grand style. It was difficult to choose a better dancer because both the bride and the groom are hot-steppers. We can’t forget easily how the bridal party stormed the hall to lead the couple in.

It was indeed a great day for the couple and their families.

The cutting of the cake was conducted by all the members of the high table. They include Senator Ibikunle Amosun and his wife, Senator Gbenga Ashafa and wife, Hon. Kunle Akinlade, Hon. Sharafa Ishola, Mr Kayode Olukoya, Mrs Lauretta Achudume, Maimuna Y Abubakar.

Shortly after the cutting of the cake, it was time for the mother and son dance. She left her seat and went straight to hug her son. She couldn’t hide that joy, it was written all over her face as they held each other. Let us also add that the groom’s mother beat everybody’s expectation as she showed us her dance steps.

She caught everybody’s attention as she rocked the dance floor with her son.

FATHER AND DAUGHTER LOVE UP AT THE EVENT

All the guests couldn’t help but admire the bond that Asiwaju Bisi Adegbuyi and his daughter shared.

The former Governor of Ogun State Senator Ibikunle Amosun was the Chairman of the day. He started his speech by welcoming all the guests. He further acknowledged the dignitaries present at the event, he thanked them for gracing the occasion. He said marriage is one institution that you receive a certificate even before going for classes. He advised the couple to bring love into their home. They should always respect one another because they are from different homes, and they shouldn’t bring a third party into their home.

According to him, there will be challenges but he prayed they won’t face challenges that they will not overcome. He advised the groom to always pamper his wife.

He mentioned that he and his wife will clock 29 years of being together and still counting. He further said, there is no marriage that doesn’t have its ups and downs but once the stay together, they would overcome any challenge that comes their way.

He ended his speech with a short prayer that their marriage will witness all the beautiful things in the world.

Former Governor of Ogun State Senator Ibikunle Amosun and wife Olufunsho Amosun always party together. Right from the Church programme to the Reception, they impressed all. These beautiful love birds played an important role at the event, Governor Ibikunle Amosun being the Chairman of the event supported them all through the event. His wife, Olufunsho Amosun who is known to be very stylish rocked the beautiful yellow lace Aso-Ebi and green gele. Despite appearing simple, everything about her speaks volume of class. Her beautiful piece of jewellery also sat well in her neck.

DIGNITARIES AT THE EVENT

The event paraded many important and notable personalities from all spheres of life. They all came to support the Adegbuyis and the Pitans as their children celebrate love.

Pretty and flawless Hajia Folani Animashaun was the cynosure of all eyes at the event. The pretty woman is the close Ally of Hajia Temitope Saranda and Oloori Barakat Akamo. She stole the show at the event. Aside the fact that she is beautiful, she is highly fashionable. Her 18carat gold was eye-catching. She made heads turn at the event.

Ever gorgeous Bisola Munis made many heads turn 360 degrees. We couldn’t help but admire how her hair was beautifully styled like that of a bride. She is beautiful and blessed with lovely body shape. She also rocked the beautiful yellow laced Aso-Ebi.

TRENYBEE WAS THE EVENT PLANNER

One reason why the event came out a huge success was because it was planned by one of the most sought after and biggest event planners in Lagos. Trendbee Event needs few or no introduction when it comes to top event planners in Nigeria. They made sure everybody was satisfied with food and souvenirs. She hired the best hands to handle the event. The décor was heavenly, eye-catching, magnificent and enticing.

It is no longer news that many rich people and celebrities always want to have Faith Band perform at their event. This young and energetic musician thrilled all the guests to a memorable experience with his music and all the guests couldn’t resist the vibes coming from his band.

READ ALSO: WHY MY HAND WAS AMPUTATED – MARY OLUCHI

OLUGBO Of UGBO, Oba AKINRUTAN’s Son, Hon. ABAYOMI Speaks About His Life As An ONDO Lawmaker