No Flings! Davido Explains Why She Gave Baby Mama, Sophia A Lift 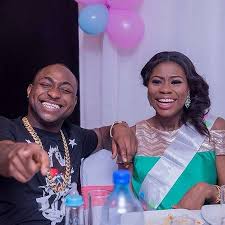 The Nigerian Twittersphere has been set abuzz in the wake of Davido’s response to rumours that he took Sophia Momodu, mother of Imade, his daughter, on a vacation trip to Ghana.

Photos of the award-winning singer and Sophia together started circulating on social media, shortly after the rumours emerged that he was having a fling with his baby mama and even took her on holiday to Ghana.

In a bid to clear the air, the ‘Risky’ crooner took to his Instagram stories to post a lengthy message warning “bloggers and purveyors of fake news” to desist from pushing false narratives that can destroy his relationship with Chioma Rowland, his fiance, whom he recently proposed to.

“I just want to drop a quick comment on the headlines of the silly blogs I’ve been seeing circulate about me taking the mother of first child on a trip to Ghana and really wish y’all will quit with it,” he wrote.

“You ALL know that I just proposed to Chioma recently and it would make no sense whatsoever for me to be doing such. My daughter’s mother had her business in Ghana with Afrochella selling Imade’s hair products at stalls and I was obviously booked to perform at Afronation.

“I simply gave her a lift for the sake of Imade who I didn’t want to be left in Lagos without her mom. It was either that or she flies economy. I don’t understand why you all would spread such rumours you know would do nothing but hurt my fiance and disrespect her family. 2020 is for positive energy. Get it with it.”

However, a part of the statement didn’t go down too well with some users who expressed their anger over the singer’s insinuation that his baby mama could only afford ticket for economy class.

While they labelled his statement “disrespectful”, another segment of internet users countered that he only explained why he gave her a lift and also doesn’t owe anyone any explanation.

“Davido’s explanation was rude, belittling and uncalled for. A total disrespect to Sophia,” a Twitter user said.

“Davido and his baby mama Sophia obviously have a child together, he gave her a lift to Ghana in his private jet because she had some “business” to take care of there. He is also engaged to Chioma & they have a child together. I’m struggling to understand what the issue is,” another user said.

READ ALSO: “I DIDN’T COME HERE TO BE A ROSSONERI MASCOT” – ZLATAN IBRAHIMOVIC SET TO FIGHT AT AC MILAN

No Flings! Davido Explains Why She Gave Baby Mama, Sophia A Lift was last modified: January 3rd, 2020 by Damilare Salami