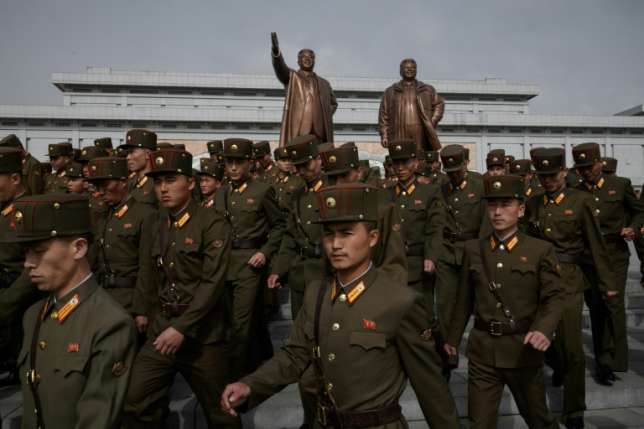 South Korea is monitoring developments in the North’s armed forces, it said Monday after reports Pyongyang replaced three of its top military officials ahead of a summit with the United States.

President Donald Trump is due to meet with North Korean leader Kim Jong Un on June 12 in Singapore, with Pyongyang’s nuclear arsenal high on the agenda.

Reports said the reshuffle could be aimed at eliminating resistance to the peace overtures.

Pyongyang’s armed forces, known as the Korean People’s Army, are immensely influential in the North and a centre of power in their own right, symbolised by the way Kim is habitually flanked by generals on one side and civilians on the other when attending major ceremonial events.

According to Yonhap news agency, which cited intelligence sources, the chief of the general staff Ri Myong Su has also been replaced by his deputy, Ri Yong Gil.

The wholesale reshuffle would be unusual if confirmed, Seoul’s unification ministry said.

According to researchers at NK Leadership Watch, the change at the top of the GPB “represents a continuation of tightening Party control over the KPA”.

The political bureau could be in a position to resist policy decisions by the leadership or try to profit from future South Korean economic aid, it said.

“Both of these things lend themselves to creating alternate power centres,” it noted.

But new GPB director Kim Su Gil was a “highly trusted” lieutenant of leader Kim Jong Un, it added, who appointed him to the Pyongyang party committee — once a power base for his uncle Jang Song Thaek — after having the older man executed for treason in 2013.

Reports said the wider changes could be aimed at preventing objections in the North’s senior military ranks to any sudden changes in the country’s nuclear policy.

The country remains technically at war after hostilities in the 1950-53 Korean War ended with an armistice rather than a peace treaty, and Kim’s father and predecessor Kim Jong Il expounded a “Songun” or “military-first” policy that is a foundational plank of the North’s ideology.

Pyongyang has long argued that it needs nuclear weapons to protect itself against a possible invasion by the US.

Yonhap cited the intelligence source as saying No Kwang Chol, the new defence minister, was known as a “moderate”.

“The North appears to have brought in new figures… as the previous officials lacked flexibility in thinking,” the source said.

But analysts said the personnel change was more likely a response to an internal matter.

“It’s meaningless to divide North Korean officials into hardliners and moderates,” said Kim Dong-yub, a professor at the Institute for Far Eastern Studies at Kyungnam University.

The personnel change was probably intended to implement the new economy-centred policies, he said, and officials with a better understanding in the area had been appointed.

No had formerly overseen the military’s financial issues as the chair of the Second Economy Commission, Kim said.

“It looks like they needed someone who can have a firm grip on the military and dynamically push ahead with the new policies amid changes in US-North Korea relations,” he added.

Senate Mourns With Channels TV Over Death of Reporter