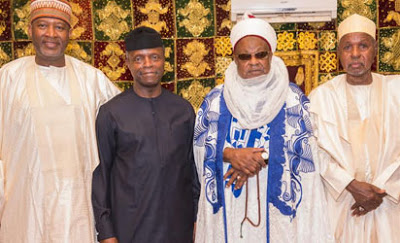 The Northern Elders Forum, NEF, yesterday cautioned the Acting President, Yemi Osinbajo, to be wary of mischievous elements plotting to overheat the polity due to the absence of President Muhammadu Buhari to score dubious political points.

In a communiqué issued after its two-day emergency meeting in Kano, the Northern Elders Forum warned those seeking undeserved political advantage to desist from such moves.

The communique read by the NEF Deputy Chairman, Chief Paul Unongo, stated that the “North is conscious of its obligations and rights and will not hesitate to discharge and defend them without reservations.”

“We are aware that attempts are being made to exploit the absence of President Buhari to achieve dubious political goals.”

The Forum therefore advised Acting President Osinbajo to, “exercise responsibilities, as he did in the past, with commitment, sensitivity, and respect for the constitution.

We urge him to ignore mischief which seeks to pitch him against the president or the Nigerian people whose mandates they both exercise.”

The communiqué noted that, “the task of governing the nation will continue uninterrupted until the return of President Buhari.

We therefore appeal to all persons with responsibility to cooperate fully to sustain a united, focused and committed administration.

“While commending the sterling contributions of Senate President Abubakar Bukola Saraki and Speaker, House of Representatives, Yakubu Dogara in providing the necessary leadership to stabilize the polity, we appeal to the executive and legislative arms of government to work together to pass the 2017 budget without further delay.”

On the clamour for restructuring, the elders Forum said the North is not afraid of the call to restructure the country, pointing out that, but warned that the call comes with sentiments, “which tend to create tensions around our coexistence as a nation that is diverse and united

Northern Elders Advise Osinbajo To Watch His Back was last modified: May 12th, 2017 by Reporter