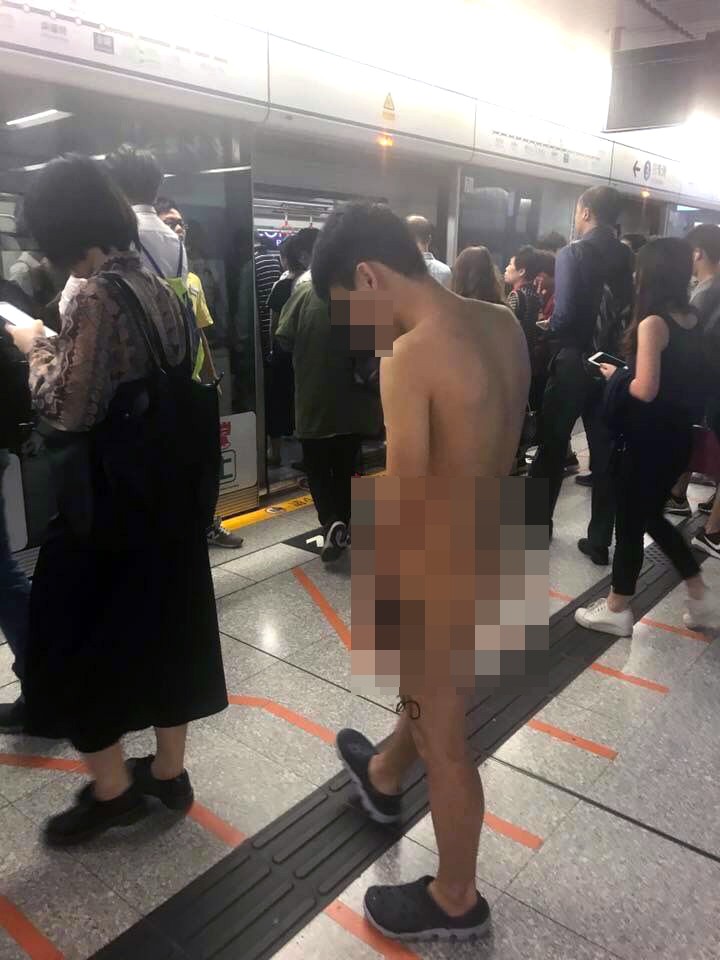 It’s now more rampant on social media to see men rock their birth suites. funny still is the fact that we happen to see more and more of this and we beg to ask if this is now a trend; Issa vibe, right?
A rather weird young man in Hong Kong recently created a stir on Wednesday night after he was seen riding on the MTR (Mass Transit Railway) during evening rush hour with no clothes.
Some pictures taken by passersby showed the man, 20, waiting for a train on a platform and riding at least two subway cars while just wearing a pair of foam clogs.
According to the South China Morning Post, the images started to go viral online from Wednesday evening, hours after the Hong Kong Observatory posted a temperature of 34.4 degrees Celsius for the city – the highest recording this year.
The n*ked man appeared to be calm and walking at a normal pace when he was first spotted near Hankow Road in Tsim Sha Tsui, where he approached an ATM.
Carrying a mobile phone and a wallet, he went down to the MTR station in Tsim Sha Tsui and waited for a train to cross the harbour at about 7pm.
The man drew significant attention in the station as it was packed with commuters during the evening rush hour. Passengers alerted subway staff.
MTR employees at Tsim Sha Tsui station saw the man boarding a train bound for Central. The railway control centre informed the station crew one stop away, at Admiralty station, an MTR spokesman said.
MTR staff at Admiralty followed the man into a Chai Wan-bound train, while the centre called police.
Inside the train, the man was on his phone and at times put on earphones. In a video clip, he was heard posing questions to an MTR employee trailing him.
“I’ll get off at Hang Hau station … will you let me take a ride?”
At North Point station, six stations from Tsim Sha Tsui, he exited the train and was approached by police and uniformed MTR employees. He was arrested, before being taken to Pamela Youde Nethersole Eastern Hospital in Chai Wan for an examination.
A police source said the man, a resident of Hau Tak Estate in Tseung Kwan O, turned agitated when confronted by the officers and was said to have given incoherent responses.
A witness who had come across the man on Hankow Road told media he had acted normally and confidently without being disturbed by passers-by who gawked at him and took photos.
The witness said he heard the man tell a security guard he was living in his own game world and asked the guard to leave him alone before walking off.
Police said the man had mental health issues.
Is This Now Trend? Completely Naked Man Caught Boarding a Train During Evening Rush Hour was last modified: July 28th, 2017 by Arinze Ago