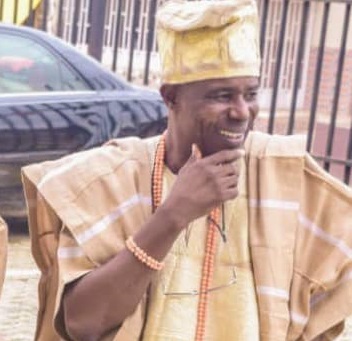 Oba Adewale Mushafau Abdul is in a happy mood right now.He is working on the successful hosting of this year’s Oluweri Festival in his town. He is the Olofin Ajaye of Orugbo Iddo.

A few days back, Kabiyeesi told Citypeople about his plans for this festival that promises to be big.

What is the ceremony all about, we asked him, a few days ago?
“For you to appreciate the ceremony, let me quickly tell you a bit about Orugbo Iddo, he explained.”It is an ancient town that has been in existence for over 400 years, with loads of traditional heritage, with a river flowing around it, and deserves to have Oluweri, which is the goddess of the river from history. But it was abandoned for such a long period of time and fortunately,I, Alayeluwa Oba Adewale Abdul, the Olofin Ajaye Orugbo Iddo happened to be the grandchild of Olujimite, from Esure Ijebu Imusin,who happened to be the daughter of Ebolu Esure with a traditional lineage in Agbo Oluweri in Esure. And this was also my father’s traditional birthplace and I also follow the same So after my emergence as an Oba, in Orugbo Iddo, in 2019, I decided to revive this rich heritage, in Orugbo Iddo in 2020. So we named our own goddess of the river, Agbo Oluweri Orugbo Iddo.”

Why is there a need to celebrate this festival/event?

“The good people of Orugbo Iddo are in the area of fishing and farmers and they believe in the goddess of the river, that once they are able to appease her she would provide them with all sorts of wealth that she has in her possession, ranging from childbearing, good health, wife, husband, good job and fulfilled life just like the visitation to Osun Osogbo shrines.”

We asked him to tell us a little about him and how it has been as kabiyeesi.

” Let me tell you a little about me so you can understand properly. My name is Alayeluwa Oba Adewale Mushafau Abdul, the Olofin Ajaye Orugbo Iddo Olusi11. I am from 3 traditional title home town, namely: ijebu ode, Orugbo Iddo and Esure Ijebu Imusin. I am the first child of my parents, Late Alhaji FK Abdul and Alhaja Anike Abdul. I am a Muslim by birth but am rich in a traditional setting, which is still learning. I had both my primary and secondary school education in Nigeria.I had my further education in London as BA Hon. HR at the University of East London, Dockland campus.”
“As a monarch, life has been very demanding and challenging, since I am a positive visionary servant, which is what the stool of Oba to me means.”
“Orugbo Iddo is a very peaceful terrain with loads of potentials which the people and the government can use in transforming the town.
We have all it takes to be a value-added community in Lagos state, as a whole, which is situated along Lagos- ijebu ode- Itoikin Road , with a waterway means of transportation, at a time frame to Victoria Island in less than 20minutes, with a short distance to Lekki free trade Zone with an inclusion of a landmass, suitable for agricultural purposes and to crown it all, with a lovely people in the community with a good heart of friendship.”

What has he been able to do since he became the Oba? What are his achievements?

“April 26th 2019 was a new dawn day in the life of my Town Orugbo Iddo,”he explained.
“Since then, loads of infrastructural developments have been taking place, starting from the Palace itself, the transformation of the educational system in the town, by employing teachers to teach people in school, renovation of abandoned property, turning it into teachers quarters, creation on 12 linked roads from Ajebowale to various parts of Orugbo Iddo, training of 300 people on vocational for Free, review of an abandoned market at Ajebo, which happened to be an ancient market that was created in the 19th century, giving of interest free loan to market women to the tune of over half a million.

I have also been able to facilitate donations of food and gifts items by various NGOs in lagos and London, including giving support to small companies such as Gari making factory and bakery services into our town ,Orugbo Iddo. To top it all, i am a mentorship servant to the people in my beloved town, Orugbo Iddo.”
“Part of my achievements was to be able to host our Agbo Remireke Festival in 2019 and a successful hosting of all lagos ijebu traditional rulers in lagos state.”

What We Would Miss About Our Dad Primate OLORUNWO