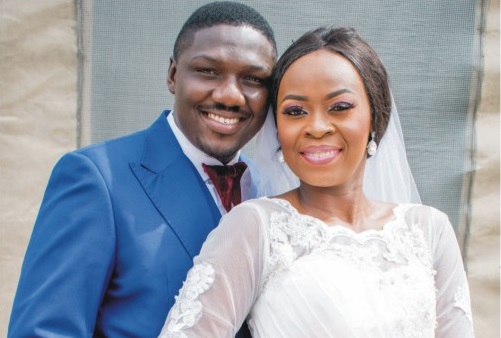 •Details Of The Classy Wedding
Saturday 23rd December will remain unforgettable in the minds of the families of His Royal Majesty Oba Adebayo Akolade, the Olora of Ora kingdom in Kwara state and late Captain Adekunle Adebayo, as Florida and Dotun walked down the aisle.
Captains of industries, paramilitary parastatals, entrepreneurs, family and friends all besieged the Divine Event Centre Gbagada, Lagos to witness the wedding party.
City People’s duo of FEMI FABUNMI & JIMMY ABDULRASHEED were at the party and now bring you all the juicy details of the ceremony.

FLORIDA &DOTUN SIGNED THE DOTTED LINES
The officiating minister, Pastor Buknor prayed for the couple and gave them marital advice. They were told to always try and settle any dispute between them under 24 hours. He advised them to do away with 3rd party interference. They both signed the marriage register and were pronounced husband & wife.

MC JESSE ANETS ANCHORED
Popular Master of ceremony Mc Jesse Anets also known as MC Omo was the anchor of the night and his performance was top notch. His choice of jokes and style presentation was out of this world. He made sure there was no dull moment as everyone was reeling in laughter throughout the duration of the event.

INTRODUCTION OF GUESTS
As soon as the bride and the groom arrived the Divine Event Center Venue of the reception, the bridal train and the Groom’s men mixed together and joined the couple to dig it on the dance floor. Thereafter, the MC introduced the special guests to the high table.

CHIEF KUNLE OYINLOYE CHAIRED THE WEDDING
Chief Kunle Oyinloye the Aro of Omu-Aran was the Chairman of Florida & Dotun wedding. He offered pieces of advice and gave marriage tips to the couple.

ABOUT THE ASO-EBI
Female guests were clad in beautiful peach lace with wine headgear to match, whilst their male counterparts wore Ash coloured stuff material with black cap to match. The Aso-Ebi made the hall look very colorful.

MEET THE PRINCE & BANKER HUBBY
The groom Akolade is a Banker who presently works with Fidelity Bank. Apart from being a banker and worker in the Harvesters International Church; he is a prince in Kwara State. His daddy is the Olora of Ora Kingdom in Kwara State.

MEET THE GROOM’S PARENTS
His Royal Majesty Oba Adebayo Akolade&Oloori Omotayo Akolade the Olora of Ora, Ofa, Kwara State. They made a big statement with their kingship outfit at the event. They came in an entourage of palace chiefs all the way from Kwara State.

MEET THE BRIDE’S PARENTS
The bride’s father, late Captain Adekunle Adebayo was an airline pilot of repute. He served under many airline companies for many years before his death in 2005.Bride’s mum is no other person than Mrs Abimbola Olatunji, an entrepreneur and she was beaming with smiles all through the duration of her daughter’s wedding.

A MINUTE SILENCE FOR BRIDE’S DAD
The Master of Ceremony of the day ordered that everyone should stand up and observe a minute silence for bride’s father Late Captain Adekunle Adebayo who piloted the ill-fated Sosoliso plane that crashed in 2005.Every guest stood up but the bride got emotional and shed tears.

YORUBA TENNIS CLUB MEMBERS STORMED THE VENUE
His Royal Majesty Oba Adebayo Akolade the Olora of Ora, is a member of Yoruba Tennis Club and his co-members decided to felicitate with the Oba on the occasion of his son’s wedding. They came and serenaded the couple with Yoruba Tennis club anthem; they also offered series of advice to the lovely couple.

IKEJA COUNTRY CLUB TOO
Late Captain Adekunle was a member of Ikeja Country Club when he was alive and that explains why members decided to grace Florida & Dotun’s wedding party. They also sang their slogan and prayed collectively for the couple.

IMMIGRATION OFFICERS NOT LEFT OUT
His Royal Majesty Oba Adebayo Akolade served in the Immigration before becoming the Olora of Ora in Kwara State. Immigration officers came en masse to celebrate with one of their own and they also made their presence felt by complimenting the effort of the security personnel on ground.

OLOMU OF OMUPO SHOWED LOVE
His Royal Majesty Oba Bayo Buari the Olomu Omupo in Kwara state also graced the occasionally. He came all the way from Kwara to celebrate with the couple Florida and Dotun.

AVALANCHE OF ROYAL FATHERS
By virtue of the fact that the groom’s father, HRH Oba Adebayo Akolade is a king in Kwara, other Kings from Kwara came to party with one of them. They are Elesa of Oke Ado, Alaran of Arandun, Yeye Oge of Ora, Olomu of Omupo and other tiled chiefs.

UNILAG ALUMNI IN THE BUILDING
The groom, Dotun Akolade is an alumnus of the University of Lagos, that explains why many of his old school mates from UNILAG decided to join him in the celebration. Many of them used the avenue as a reunion and it was a worthwhile experience for them.

FIDELITY BANK STAFFERS CAME IN NUMBERS
The hubby is presently under the payroll of Fidelity bank hence the presence of friends and colleagues from the bank. They ensured they took series of pictures with the couple.

EVENT PUT TOGETHER BY PERFECT TOUCHES
The Florida and Dotun expensive wedding party was packaged by a Lagos State based event planning company, Perfect Touches. The company situated at No. 4 Towry Street, Lagos Island, did a yeoman’s job. The Company’s CEO Olubando Nofisat was physically present and seen moving from one end of the hall to another, ensuring that all went well during the wedding.

USHERS @ THE BECK AND CALL OF GUESTS.
Clad in a green gown with beautiful hairdo, Perfect Touches ushers were so magnificent in the discharge of their duties, as they did it with vigour and panache. They simply moved from one table to another ensuring guests were properly taken care of.

NUMEROUS VENDORS ON PARADE
All kinds of food and drinks vendors were on ground to treat guests to a wonderful experience. All kinds of delicious local and international dishes were served to guests on request. They are Honey Rock Food, Moris catering services and cocktail drinks.

WHAT THE BRIDE SAID
Mrs Florida Adebayo, the bride of the day, said she met her hubby in church i.e Harvesters International Church when they both served in the same unit. She posited that she never took him serious at first because of his promise and fail attitude as at then. ‘’At first he wasn’t serious about the relationship when he approached me; he would promise to take me out on a date and wouldn’t show up. However, at some point he became serious and wanted a solidified relationship. I noticed he is God fearing and handsome so I gave in’’.

WHAT THE GROOM SAID
Mr Dotun Akolade explained that her beauty and carriage in church attracted her to him. ‘’ she is hardworking and God fearing, I couldn’t resist her beauty and good character. I approached her but wasn’t serious for a period of one year. I later got serious and we solidified the relationship’.

MAXIMUM SECURITY PROVIDED
Hefty men from Safer man security outfit were on ground to provide security at the venue .They ensured the event was hitch free; their men kept moving round the hall to ensure the wedding went well.