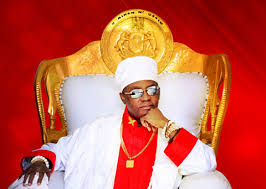 Edo State, and in particular the Benin Kingdom, has been given a bad image globally because of human trafficking.

But that ends now.

His Majesty, Omo N’Oba N’Edo Uku Akpolokpolo, Oba Ewuare II Ogidigan, Oba of Benin Kingdom, is tired of the scourge being associated with his kingdom.

He has declared his commitment to fight the menace, adding that he had done it in the past when he was the Nigerian Ambassador to Italy.

This was announced during a visit by the Director-General of NAPTIP, Julie Okah-Donli, to the Monarch in Benin City, the Edo State capital.

She asked that the Oba should join NAPTIP in its renewed effort at stopping the ‘juju priests’ in Benin from further administering oaths on victims of human trafficking.

“Many of the young people that have left may never come back as they are dead, and their parents are still hoping that they will come back some day with loads of money, while many have lost their minds as a result of the exploitation they have gone through,” she said.

He warned perpetrators of the heinous act to stay away from Benin as the trade has brought more sorrow than joy to the people.

While condemning the enslavement of Nigerians in Libya, he disclosed how shocked he was when he heard that many of the victims were able bodied men and women who packed up their businesses, sold all they had to embark on the senseless journey.

“If anyone wants to travel, he should travel legally,” he said.

He also frowned at the activities of the native doctors and the juju priests in the trafficking chain but promised that the Palace will call them to order.

“We have noted the activities of the native doctors or the juju priests as you call them. We will do our best to discourage them from getting involved in this crime.

“We will appeal to them. We will talk directly to them to stop what they are doing. We will call them to order and I believe they will listen to us,” he promised.

Davido Producer Kiddominant Brags -Am The Best Producer In The World”