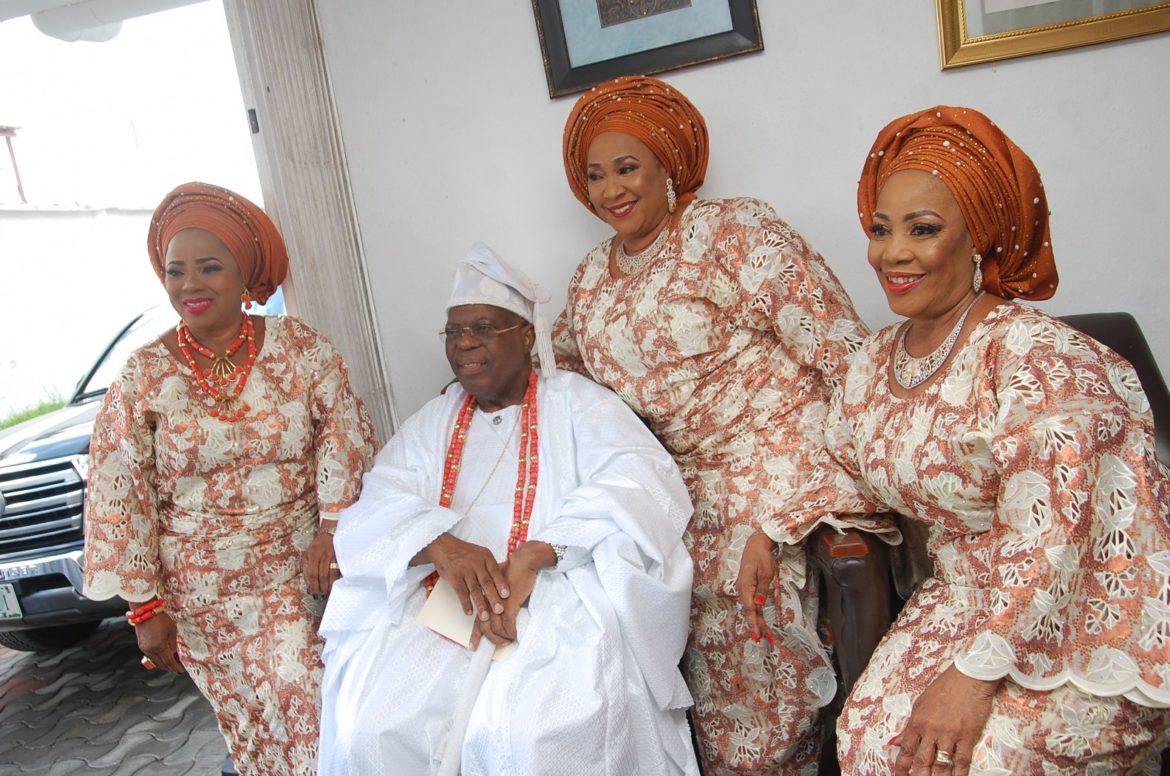 The 3 Oloori’s of Oba AdedapoTejuoso are pretty, stylish and colourful. And whenever they step out, all eyes usually turn in their direction. They are Oloori Omolara, Yetunde & Labisi. They are the 3 wives of the Osinle Oke Ona Egba. During the recent celebration of Oba Tejuoso’s 30 years on throne, the king decided to surprise his 3 beautiful Queens with their first ever chieftaincy title. He made it a secret and never discussed it with any of them until the day of the coronation. His words were, “if they knew they will be getting a chieftaincy tittle today, they will probably still be in Lagos shopping for what to wear for their Iwuye ceremony, I am sorry for not letting you invite friends and family to your chieftaincy ceremony, but I want to surprise you for being who you are for all these years.

Oloori Omolara Adesola was bestowed with the title of Yeyeluwa Ago Oko/Yeyeluwa Oke Ona Egba.

Oloori Omolara is in her 60s. But she looks younger than her age. She is also very beautiful. She is one of the celebrity women in the society who are aging gracefully.

One thing you cannot ignore about Oloori Omolara is her fashion and style. She and the 2 other Oloori’s, Yetunde and Labisi know what to wear to which occasion to make them look gorgeous.

Oloori Omolara was born with a silverspoon , Her dad was late Baba Gabriel Odesanya Adeleye, popularly known as Ade Million. Her father was very strict, but he took care of the children, always wanted to make them comfortable with material things like cloth and jewellery and food. Her mother, on the other hand, is also strict, she made the children do all house chores before living for school and Oloori Omolara have to open her shop and make her breakfast ready.”

“The most wonderful thing she inherited from her mum (Mrs. Beatrice Aderibigbe Adeleye) is how she used to dress then. She had it all and also made good use of it. She loves to look good all the time, which she also inculcated in all her children. Her father would say then that Omo o kibaipele Iya re nlekobaaso je, meaning she took over from her mother, Oloori Omolara says”.

She met Kabiyesi at a party on the 24th of February 1973, she was putting on something casual, but the fact that she combined it well made it look good on her, but one day Kabiyesi asked how and where she got all the gold jewellery and clothes from and she told him they were from my parents.

Oloori Omolara is a devoted Christian and she is passionate on things of God.

She loves good music, classy and solemn music and she also enjoys praise and worship songs. On what life has taught her at over 60, she said “life has taught me not to take anything on the face value, to cast all my burden on God, not to be short-sighted and most importantly, life has taught me to live right. She has been married to Oba Tejuoso for over 45 years.

She has been married to Oba Tejuoso for over 37 years.

Growing up years was fun and wonderful for Oloori Yetunde, she grew up in Lagos, although her dad is from Ijesha and her mum from Ijebu but she was born in Lagos inside the compound of the ECWA Church in Ilupeju, her father and some other missionary founded the church so that was where they were living before she travelled to Ijebu to live with her maternal grandparent, she went to AGGS Ijebu and she enjoys cooking a lot, she can be in kitchen for a whole day cooking and will never get tired which lead her into a catering school pending the time she will gather her result, so she met Kabiyesi almost when she was graduating and he promised her not to worry that he was going to give her a job at his hotel, it was a dream that never came true she later found out he did not want her to work.

She later work a bit with National Oil Marina and ASCON too then she later worked for her husband as a dealer at AVIS Petrol Station at Orile Iganmu she was the first agent then.

Oloori Labisi Tejuosho is the 3rd of the 3 Oloori’s of Oba Adedapo Tejuosho, the Osile Okeona. She is beautiful, calm and also a fashionista. Anyone, who has met the three Oloori at one or two functions can easily tell how the three Oloori dress to fit any occasion they attend.

She is a graduate of Business Administration and International Relations from Oxford University, London.

She loves looking good from her tender age. She knows what to wear, when to wear it and how to combine it. She is a very fashionable person.

Growing up years for her was  very beautiful and wonderful. She had a very good childhood, she grew up in Lagos, she later left for her university education in London and she came back home and got married.

Her father Mr. Badejo, was the first man to have a record label in Nigeria, which was Badejo Records, she had her secondary education in Lagos and Ibadan and later proceeded to Oxford University in London, where she had a double degree at Oxford University. She read Business Administration and International Relations, she also went to France to do a course in French and she got married when she got back home.

After her youth corps scheme, she didn’t work again because Kabiyeesi, although he was not an Oba then wanted her to be a full house wife.

She met Oba Tejuoso in London in 1981 and they struck their relationship and got married within a little period of courtship since they both knew what they wanted. They have been married for more than 33 years now.

Tips To Getting A Stunning Make Up