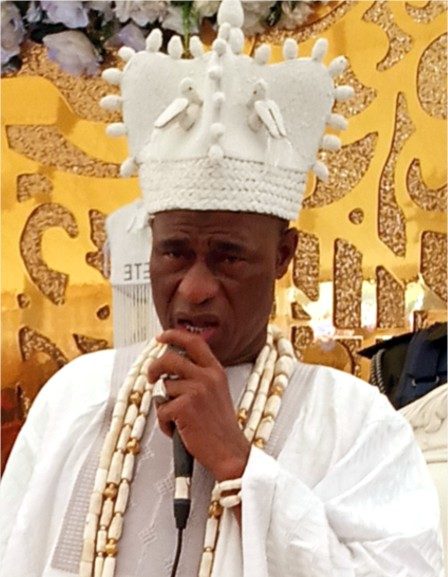 •Details Of The Classy Coronation

For a long time, the people of Irete Ijebu Community in Ogun State had wished for a King of their own. But their long wait is finally over, as the first Monarch for the sprawling community has finally emerged. And interestingly, the new Royal Father for Irete Ijebu is a well accomplished son of the soil in the person of His Royal Majesty (HRM) Oba Abdul Ganiyu Olusegun Awokoya-Yesufu. The Kutimehin Adetutu 1, Onirete of Irete Ijebu, a Surveyor of international repute was duly installed by the Ogun State Government on Saturday, 2nd October, 2021, amidst pomp and pageantry.

The event started shortly after the arrival of the Ogun State Commissioner for Local Government and Chieftaincy Affairs, Hon. Moruf Afolabi Afuape, who stood in for the Governor, Prince Dapo Abiodun, on the occassion. And to kick off the event officially, Ogun State Anthem was taken with popular radio presenter in Ijebu-Ode known as Ajisebi Oyo leading the way. Right after that, opening prayer was said by a Christian Cleric before the main activities for the day started.

The programme proper started with the with a Welcome Address which was taken by the Chairman of the Planning Committee, Alhaji Erinle Kolawole who went deeply into the history of Irete Ijebu town which he said has been in existence since mid sixteenth century (AD). “ It has been the ancestral home of Anowoneyo Ruling Families which is one of four Ruling Families that constitute the Dagburewe Dynasty of Idowa. The other Royal Families are; Agbejoye, Arijeloye and Agbonmagbe in that order.” He narrated.

Detailing the history further, the Alhaji Erinle said: “His Royal Highness Oba Y.O. Adekoya OON, JP ( Agbonmagbe II) Dagburewe of Idowa is currently on the throne and presently the head and custodian of tradition of Dagburewe Dynasty of Idowa. By tradition, he is second in rank to HRM, Oba S.K. Adetona (Ogbagba II), the Paramount Ruler and Awujale of Ijebu Land. All Kabiyesi in (I.T.C) here present, Igba Odun, Odun kan ni (Amin).”

He said further that, “Irete community is appreciative and will continue to cherish today’s event in history as long as life exists. Because, this is the first time that Anowoneyo Ruling Family is having a crowned Oba in her ancestral base (Irete) like the other three Royal Families in her cadre in the Dagburewe Dynasty in Idowa. Idowa, the head of Dagburewe Dynasty had been in existence since (1540) AD when it was founded by Owa Otutubiosun the first Dagburewe of Idowa and 13th Awujale of Ijebu Land. The age-long lapse in the realization of today’s event can be ascribed to the complacent nature of our forefathers and their humility to a fault.”

Alhaji Erinle later thanked the Awujale as well as other notable people for their immeasurable support in ensuring that the choice of Oba Awokoya-Yesufu got the Ogun State Government’s nod quickly which made the coronation ceremony possible. And after Alhaji Erinle’s speech there was Cultural Dance by a group before the Executive Chairman of Odogbolu Local Government under which Irete Ijebu falls, Hon. Ladejobi Shuaib Adebayo took his speech. After the LG Chairman, Oba Yinusa Adekoya, the Dagburewe of Idowa, who represented the Awujale of Ijebu at the occasion, took goodwill message on behalf of the Awujale.

Without further ado, Hon. Afuape took a short speech on behalf of Governor Abiodun after which he proceeded with the presentation of Staff of Office to the new Oba. There was a homage to Oba Awokoya-Yesufu by the other Obas in attendance as they danced to cultural music together. And afterwards, the new Oba in his speech of appreciation thanked the State Government and everyone that contorted to making the day a reality.

Speaking with City People shortly after the official part of the event, the Chairman of the Planning Committee affirmed that, based on the accomplishment and high pedigree of the new Onirete of Irete, his reign would surely bring good and quick development to Irete Kingdom. “ He has all other takes to do it, “ he gushed. The event thereafter went into party proper as Fuji music star, Alhaji (Dr.) Sefiu Alao Adekunle, Agbara Orin, serenaded the audience with his good music till well into the evening.

How Late Dudu Heritage Gave Me My Big Break – OBESERE