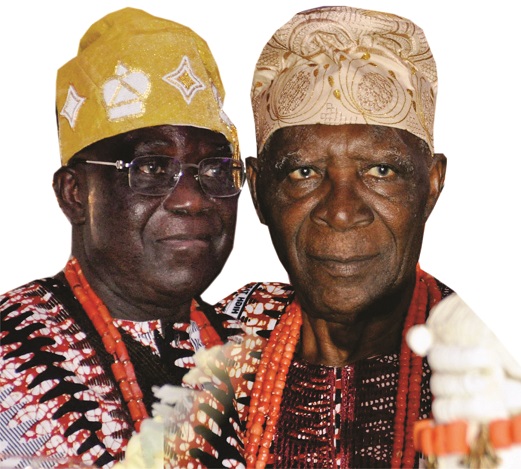 Aremo Adesegun Oniru is the crown Prince of His Royal Majesty, Oba Idowu Abiodun Oniru, the Oniru of Iruland. He looks ver much like his father, facially. His dad recently turned 80 and he spoke about how the grand old man influenced his life and made him study Engineering like him. Below are excerpts of his interview in the 80th Birthday Brochure and the initial interview he granted City People.

Oba Idowu Oniru and Oba Adetunji Akinloye are best friends. And this is authoritative. Their friendship started several years ago and up till now, their friendship keeps getting stronger and stronger.

Last weekend Oba Idowu Oniru, the Oniru of Iruland celebrated his 80th birthday and one of the prominent first class monarchs who graced the party was Oba Adetunji Akinloye, the Ojomu of Ajiranland in Lagos. He was one of the early callers at the event and he sat on the VVIP table meant for kings. Sharing some similarities together, Oba Ajiran is one of the close confidants of Oba Oniru and most times, they go out together. In fact they sometimes wear similar attires and both are birthday mates. They were both born on same day but different year.

Despite the 3 years’ age difference between them, they both respect each other. According to the hierarchical sequence, they are both no 14 in their lineages to become Oba, they are both in same community, run similar businesses, their reign of over 2 decades is just 2 years’ difference, they both schooled abroad and so on. No wonder even at the party, they became inseparable.

At the birthday ceremony, there was a documentary on Oba Oniru and Oba Ajiran was one of the few prominent Obas who spoke at length about the celebrant. Even in his tribute, he referred to Oba Oniru as a big brother. He revealed that they share same birthday, they are both into real estate and have been friends for many decades, “I oba Tijani Adetunji Akinloye, Sateru 11 congratulate Oba Musekiyu Idowu Oniru , Akiogun 11, my co celebrant of today on the occasion of his 80th birthday,you are a big brother in-deed as you are accommodating, open minded, willing, enduring, frank, generous and easy to get along with in harmony and good spirit. God has endowed you and blessed you well. I thank God for making you who you are, the Almighty will continue to abide with you and make you live many more years in good health’’.

Oba Adetunji Akinloye is a Director at City Scape International Limited. He is the Ojomu of Ajiranland and a foremost traditional ruler in all of the Lekki Peninsula. The University of Ife graduate was honored with the National Honour of O.O.N (Order of the Niger Award) and he is presently the Chairman of Royal Realties Limited, a Cityscape subsidiary; a real estate development company currently involved in the development of two private residential estates along the highbrow Lekki corridor in Lagos. His rich love for philanthropy and his fatherly and royal concern for the wellbeing of his people also led him to start the Centre for World Peace; a non-governmental organization devoted to helping the poor achieve self-sustenance and to promote world peace and harmony.

There is no dull moment around him. Jovial, generous, articulate and obliging, born of higher pedigree, he has continued to remain in touch in with his roots and his people. Blue-blooded, he has ruled for over 20 years as Ojomu of Ajiranland, stepping onto the throne precisely 24 years ago. Born on September 6, 1940, 3 years after Oba Oniru was born, he is an alumnus of St. Matthias Catholic School, Lafiaji, Lagos, Hussey College, Warri, and Abeokuta Grammar School, then University of Ife (now Obafemi Awolowo University) where he studied Agriculture.

He later acquired a postgraduate diploma in education in 1981. He started his career with teaching and taught at various schools. He served as Principal, Community High School, Ilado, Maroko, he was the first Executive Secretary of the Eti-Osa Local Government Education Authority; He was crowned as the 14th Oba Ojomu of Ajiranland on 23rd October, 1993. He is presently the Chairman of Royal Realties Limited. He was honored by the Federal Government of Nigeria in 2003 as Officer of the Order of the Niger (OON) and was also a Councilor of the Action Group.

Oba Oniru is unarguably one of the 1st class and richest Obas in Lagos. He wields enormous influence within the Lagos social sector and its developmental scheme. The Oniru Dynasty has for many years contributed to the growth of Lagos State through its infrastructural activities within the state especially the Island /Lekki Axis. Oba Idowu Abiodun Oniru is the 14th Oniru of Iruland, Akiogun 11, The 80-year-old monarch never looks close to eighty, he has been on the throne for over 20 years. Very sociable and highly industrious, he has a very large family. In his dynasty, at the palace, he has 8 white cap chiefs, 17 traditional Chiefs and 13 community chiefs, also with an advisory board of 6 members. His children are all successful and hold some top positions in the government.

He started at St David’s Primary School and finished his primary education at Araromi Baptist School in Lagos. He went on to Eko Boys High School for his secondary education where his leadership qualities became obvious. As a result, he was made the financial secretary of Oke Popo Boys Club and then the Chairman of the same club. He represented his school in high jump and pole vault. He was very popular in his youth and was well known for his love for dance. He left Nigeria in 1965 to the United Kingdom where he studied Civil Engineering at the British Institute of Engineering Technology in slough. His choice to study Civil Engineering was as a result of the great plans he had for the family. He returned in July 1968 after completing his course.