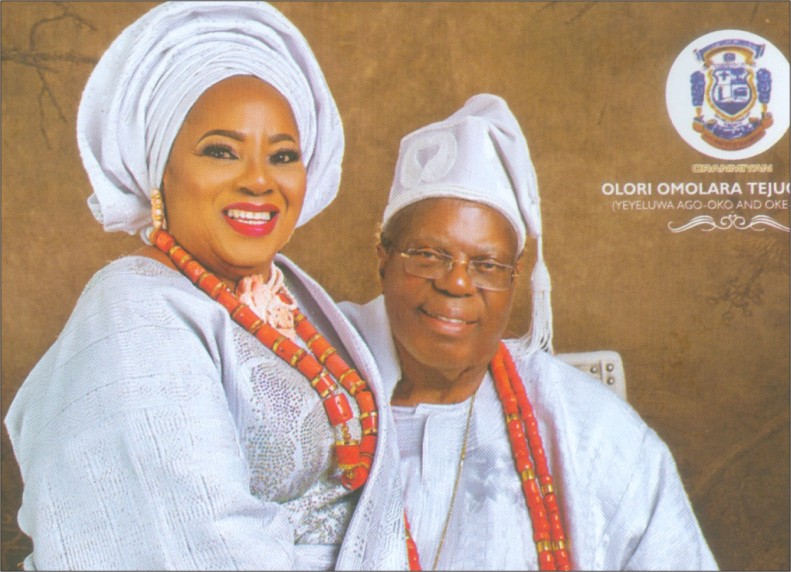 On Tuesday 7th September 2021, Abeokuta witnessed a classy party that shook the ancient city to its very root. It was the 70th Birthday Anniversary of Olori Omolara Tejuoso, the eldest of the 3 Olori’s of His Royal Majesty, Oba Dr. Adedapo Adewale Tejuoso, Osile Oke-Ona Egba. It was a well-attended ceremony, which started with a church service at The African Church, Cathedral of St. James, Idi-Ape, Ago-Oko, Abeokuta and ended with a reception party held at OOPL Event Centre.

From 10.30 am, the street in front of the church began to fill up with exotic cars & Jeeps of very important people who came to celebrate with the celebrant and the family. And by 11.00 am, the celebrant and her husband arrived the church. Kabiyeesi who is 84, does not look his age, in any way. And he has kept his ever refreshing look and his flawless skin which glows. Kabiyeesi carries His Grace, as he has continued to remain strong. The Birthday girl also does not look 70. She looks ageless. And has maintained her athletic frame. Kabiyeesi had in hand, with Olori Omolara, climbed the flight of stairs into the church.

Both the couple and all the guests turned up in white, which was stated in the Invitation cards. Members of the Tejuoso & Odeneye family stormed the church service and reception to celebrate with Olori Omolara Adesola Olayemi Tejuoso, who is the Yeyeluwa Ago-Oko & Oke Ona Egba. She was supported by Kabiyeesi’s 2 other Olori’s, namely: Yetunde Oluwafunmilayotemi Tejuoso (Mambee) and Olori Olabisi Tejuoso.

Many society women came for the church service from Lagos & Abeokuta. Erelu Abiola Dosumu attended. So also former Ogun 1st Lady, Chief Mrs. Olufunsho Amosun. There were so many Olori’s in attendance.

A lot of Ogun State Obas also turned up for the church service. The Akarigbo of Remoland, the Agura of Gbaguraland and many traditional rulers came to celebrate with Kabiyeesi & Olori Omolara. The officiating Ministers did a good job.

The Cathedral Provost, The Rt. Rev. B.O. Omolade was there. So, also the Bishop, Egba Diocese, The Rt Rev. K.A Olaniyi and His Eminence Dr. E.J. Udofia Phd, the Primate, African Church. The service went on for about 3 hours before everyone moved to OOPL for the Grand reception, which attracted over 1,000 guests.

The Master of Ceremony was ace broadcaster, Tunji Akintayo & Tee A. Both did a good job in anchoring the event. Music was by ARISTOS Band led by the CEO, Sammy Sodeke and the Ebenezer Obey Music Band. Tolu Obey led the band to thrill guests. It was a gathering of celebrity women & traditional rulers. The 2nd & 3rd generation of Tejuoso’s invited all their friends too.

There was so much to eat and drink. Till the last guest left drinks flowed and hot food were being served. The Tejuoso family went for all the wave-making vendors who gave their best. Drinks Delight handled cocktail & Mocktail, Onions Culinary handled catering.

Olori Omolara Tejuoso, who is popularly called Olori Agba took the opportunity of her 70th to launch her 98-page Autobiography, titled FINISHING STRONG: A motivational and inspirational book. One of her daughters, Princess Abisola Lekan Akanbi wrote the Foreward, while Oba Dr. Adedapo Tejuoso CON wrote the Preface.