Home Media Obasanjo to Awujale: You are a rumor monger, a liar
MediaNews 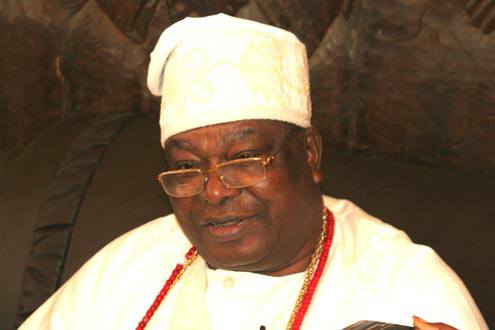 In the heat of the social buzz about Awujaale of Ijebuland in his recent comment on how former president Obasanjo wanted to use the CEO of Glocabom as a pawn in his bid to gain his third term in office.

The Ijebu royal father had said in his biography that Obasanjo used EFCC as a mechanism to challenge and jail everyone who opposed his third term bid.

Obasanjo has reacted to the post and called the royal father a liar. In his words;

“Kabiyesi, the type of hate propaganda you have tried to project in that section of your book against my person is grossly unbecoming of an Oba let alone an Oba of your status and stature.”

The extract from your Autobiography “Awujale: The Autobiography of Alaiyeluwa Oba S. K. Adetona, Ogbagba II”, published by Mosuro Publishers 2010, pp. 187-195, which I attach to this letter was presented to me for my attention.

Your assertion in the publication was a tissue of lies and untruths. Olopade is one of my best friends and yes, I would be at his birthday celebration but I would not have invited Mike, your cousin, to meet me anywhere other than my office or official residence as President of Nigeria. Kabiyesi, do you think I would set the press up to capture me and Mike in a photograph for the newspapers? That would be puerile of me as President. Of course, I could not say that Mike could not do that. That you think that I, as President of Nigeria, would descend to such depravity makes me think of you much less than I thought of you, until now.

The invitation to Mike to contribute to the building of the Library block of Bells University was issued to him by the then Vice-Chancellor, Professor Julius Okogie, who never told me about inviting Mike to so contribute until Mike pulled out. And that I have not and I will not talk to Mike about it should convince you that I know nothing about its genesis.

Under my watch, Economic and Financial Crimes Commission, EFCC, was free to do its job as it saw fit. Common sense would suggest that wild rumours should not be perpetrated by an Oba of your calibre. Kabiyesi, your cousin did not tell you that My Chief of Staff, Abdul Mohammed, put his reputation on the line by assuring EFCC that Mike would go nowhere and they should trust him to give him his passport. I did not even know that Abdul had done that until the Chairman of EFCC, Nuhu Ribadu, reported the case of my Chief of Staff seemingly colluding with Mike to run out of the country. But I had implicit confidence in my Chief of Staff and I was to resolve the issue. Should your cousin not have mentioned to Abdul who guaranteed the release of his passport his fears and intention to go on exile?

On several occasions, Nuhu Ribadu has asserted that, under my watch, he was a free agent to do his work as he deemed fit. Where it was necessary, he reported the outcome of his work to me and the subsequent or follow-up actions he intended to take. On no occasion did I guide, lead or direct him on what to do.

Mike did not need to send anything to me to satisfy me, he needed to satisfy EFCC and so your sending any documents to me was insinuating that I am the one to be satisfied rather than the EFCC. So, such documents were not paid any attention by me. You, as the cousin and part beneficiary from Mike as you have told me in the past, would not be able to see the tree from the forest as far as the mode of operation of Nuhu Ribadu was concerned viz-a-viz Mike. If the EFCC was investigating anybody, I did not consider it right for me as the President of Nigeria to be undermining EFCC by hobnobbing with that person. EFCC must be given free hand to do its work. Even if such a person was my child, the best I could do would be to secure a good lawyer to handle the matter before the EFCC for that child.

It is not only in the case of Obajana Cement that you were rumour-mongering about me. You have done that repeatedly on many occasions. The latest one you did in 2016 was you telling me that you heard that I had gone to Rasak Okoya to seek to marry her daughter, Abiola, when it was the girl that came to appeal to me to intervene to placate and appeal to her father to forgive her for all her misbehaviour to her father. I did and the father and daughter were reconciled. I told you even then that it was unbecoming of an Oba. Of course, I am used to such rumours, slandering and insinuations since my days as a Unit Commander in the Army and I have developed a thick skin. If ten per cent of the rumours ascribing businesses and properties I know nothing about were true, I would be the richest man on earth.

But recently, when Aliko, yourself and myself were together, Aliko assured you that I never ever had a single share in any of Aliko’s business interests but whenever he has called on me to help within and without to promote his business interest, I have always helped and I will always do because that is part of my job as a Nigerian leader – to help Nigerians grow their businesses or interests – and I have done that for other Nigerians and indeed for non-Nigerians, Africans and non-Africans who have requested me for help.

It was revealing to me on that occasion when Aliko made the point that one of his directors on his cement company is somebody very close to you.

I owed nobody any apologies in the course of doing my work as I believe I should do it or in the course of defending the interest of Nigeria and defending my integrity. As I could not open the treasury for S. O. Bakare for your so-called political support to me, I did not regard that as an offence. To the extent that I believed and regarded as proper, I instructed Tony Anenih as Minister of Works to patronise S. O. Bakare as a Peugeot car dealer. I will not comment on Atiku issue that you touched upon in your book because I have dealt with that elsewhere and you were only dabbling into an area where and the thing you are absolutely ignorant about.

All that you wanted me to do in respect of Mike was improper whether when I was President or when I was out of office. I must not be seen to be in the way of allowing the law to take its natural course. All I should do is to help the course of the law and help secure a good lawyer to help the process.

It is of interest to me that Mike did not tell you that when he wanted national honour, he came to me and I did not react until Babangida recommended him and said, “Of all those, I have helped, Mike is one of the most appreciative.”

Kabiyesi, if I have squandered all the goodwill I had, you would not have contacted me on behalf of All Progressive Party, APC, to receive them in 2014 and you would not have been personally present when I received them as I demanded. I probably have greater goodwill today internally and externally than I had in office.

Kabiyesi, the total sum of what you have put down in those pages of your book is that I dislike Mike. Maybe I need to remind you that if there was any iota of truth in such a position or mindset, Mike would not have been granted the mobile telephone licence which made him a billionaire. It was my prerogative as the President so to do. You may also be reminded that in the first round of the auction which Mike did not make, the country earned US$285 million for each licence. The country earned only US$200 million from the licence transaction with Mike and in the subsequent transaction with Etisalat, the country earned US$400 million. It was a deliberate action on my part that a Nigerian should own one of the licences. Anybody else but Mike could have been that Nigerian.

Kabiyesi, the type of hate propaganda you have tried to project in that section of your book against my person is grossly unbecoming of an Oba let alone an Oba of your status and stature.

However, I still accord you the respect which I believe an Oba should be accorded and one for that matter who I presume to be a friend. In spite of your unfortunate projection, my position remains the same – respect for you as an Oba and a friend.

Kabiyesi, I believe that I should set the record straight for posterity and to caution you from engaging in unedifying rumour-mongering and untruth. Accept the assurances of my highest consideration.

Obasanjo to Awujale: You are a rumor monger, a liar was last modified: January 4th, 2017 by Reporter

Amazing: Some Beauty Uses Of Toothpaste You Don’t Know