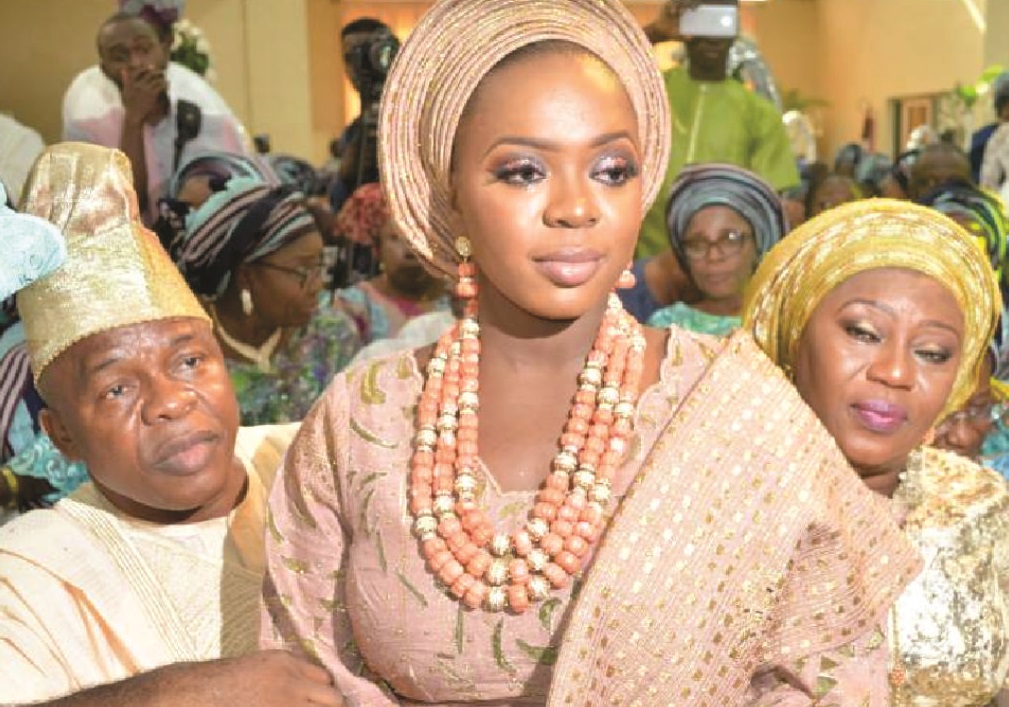 All roads lead to Abeokuta, the Ogun State Capital, last week  21st of December 2017, when  the State SSG, Barrister Taiwo Adeoluwa gave out his daughter’s hand in marriage. His daughter, Oyindamola Oreoluwa, who is also his first child, married her hearthrob, Ayodeji Simeon Badru Fadaunsi, whose father is an Ijesa Prince.  The engagement ceremony was held at The Providence Events Centre, Abiola way Abeokuta, while the  reception was held on Saturday 23rd of December, 2018. Ogun State Correspondent BUNMI MUSTAPHA, who was at the event brings you gist from the most-talked about wedding in town right now.

Those who know  the Ogun State Governor, Senator Ibikunle Amosun and the State SSG , Barrister Taiwo Adeoluwa, who is the bride’s father, will know that they have been best of friends for more than two decades and they remain inseparable.  This explains why the governor did not only come for the wedding engagement, but was at the venue a day to the event to see how things were being co-ordinated.  He came during the engagement proper but quickly left, owing to the fact that he had to attend to some official duties with the Vice President, Yemi Osinbajo who was in town the same day.  Despite his busy schedule, Governor Amosun spent quality time and played a fatherly role.

Former President Olusegun Obasanjo was among dignitaries, who came and also graced the event as one of the fathers of the bride. He came with his wife, Mrs Bola Obasanjo. Although they came early, but left immediately after the engagement.

THE PARAMOUNT RULERS WHO CAME

Oguns three paramount rulers were present at the event, The Alake of Egbaland, Oba Adedotun Aremu Gbadebo, who shares a tight bond with the father of the bride, came with his full entourage.  The Paramount Ruler of Yewaland, Oba Kehinde Olugbenle was also present  with his Oloori. The newly installed Akarigbo of Remoland, Oba Babatunde Adewale Ajayi also graced the event, and they were all seated with the bride’s parents on the high table.

OSILE OKE ONA NOT LEFT OUT

Oba (Dr) Adedapo Tejuoso,  the Osile of Oke Ona, also shared the high table with the bride’s parents. The king, who came early came with one of his Olooris, Oloori Yetunde Tejuoso.  They spent quality time at the reception.

Wife of the Ogun State Governor,  Mrs Olufunso Amosun, who is also very close to Mrs. Adeoluwa stepped into the venue looking stunning and beautiful as ever. The pretty first lady is known to be a simple but stylish dresser; her beautiful teal fabric was a perfect match for her coral beads.

THE BRIDE’S FATHER IN A JOYOUS AND DANCING MOOD

The father of the bride who is the Ogun State SSG , Barrister Taiwo Adeoluwa, could not hide the fact that it was a big day for him and one of his happiest days, he was in a high spirit through out the duration of  the event and also danced joyously  to the thanksgiving songs. When it was time to put the veil on the bride’s face during the engagement proper, he did it with his wife as he said” it is the duty of the father too. It was an emotional moment.

Queen of Juju herself, Queen Ayo Balogun, was the official musician of the day and she kept guests on their feet all hours unend at the event with her melodious tunes.

AYAN JESU WALKED THE COUPLE  IN

As requested by the couple, Ayan Jesu was on the band stand to walk the couple in with their songs and special number. Although they walked in individually for engagement procedures, but they were allowed to dance and enjoy the moment, especially the bride, who took her time with every dance step with the wonderful tunes coming from Ayan Jesu.

ABOUT THE GREEN HUMBREY DECOR

The event venue was turned into an haven of green. The theme of the engagement was green, but the stage, which is called Green Humbrey is  something that could not be ignored. Subtle Elegance is the name of the outfit that did the decor, fresh flowers were played around with in a well arranged manner on the high rise centre pieces placed on each table. The three Humbreys on the stage were also covered with green flowers, while the walkway was made of green grass. The two arks on the walk way were also covered with green flowers not to mention the lighting which made the stage a sight to behold. Abimbola Oladiran is the brain behind Subtle Elegance of the decor outfit.

The event was planned by Lagos popular planner, B Signature, and the outfit is, no doubt, good at what it does as the event was a well planned one. Everyone got whatever they wanted without hustling for it. The coordinators were on point to see to everyone’s need. Their beautiful and well trained ushers were dressed in an outfit to match the traditional wedding, which was Aso Oke and Lace fabrics with Iyun on their necks to complete the outfit. Mrs. Bola, the brain behind B Signature, was also everywhere to see to guests being cared for.

BALOGUN AND SERIKI OF EGBALAND CAME

The Balogun of Egbaland, Alhaji Sikirulai Atobatele, and the Seriki of Egbaland, Seriki Tosin Fadare both graced the occasion. These two are known to be very close and also among those who run the palace with Alake of Egbaland.

ON THE TABLE OF THE ROYAL FATHERS

It was an array of Obas at the event, as they came out enmasse to rejoice with the SSG.  Present at the event were; Oba Fatai Akorede Akamo the Olu of Itori, Oba Kolawole Sowemimo the Olu of Owode, Oba Akintunde Akinyemi the Eselu of Iselu, Oba Olufemi Ogunleye Towulade Akinale, Oba Semiu Alao Sodipo Onijagunna of Jagunna, Oba Ademola J E Ogunbona Onimoko of Mokolokin, Oba Kayode A Kusoro Olu of Aga Olowo, Oba Oluwaseun A Ogunmuyiwa Elejio of Ejio, Oba Olatunbosun Jolaosho Olu of Olorunda, Oba Rasaq Famuyiwa Onipapa of Papa.

To usher the bride in were the aso ebi ladies who dazzled in the blue aso ebi with carton gele to match. These ladies were not only pretty, but also stylish and their make-up looked flawless and they, no doubt, can dance.

CHIEF OF STAFF CAME WITH WIFE

The Ogun State Chief of Staff, and 2019 gubernatorial aspirant, Tolu Odebiyi, was also at the event, he came with his stylish and dark skinned wife, Shade.

Speaker of Ogun State House of Assembly, Honourable Suraj Adekunle Adekunbi, who is also 2019 gubernatorial aspirant, did not miss the wedding for the world as he is also close to the SSG.  His wife was also at the event, although she came before her husband  to support the bride’s mother as they belong to same association. she was also  on ground a day before the event.

Barrister Funmi Adeyemi is the Director of the Legal Department at the Ogun State House of Assembly, and also wife of Bayo Adeyemi the Special Adviser on Education. This pretty woman was very supportive with the preparation for  the wedding, she had been with the mother of the bride weeks before the event and was also very  visible at the event.

ABOUT THE BRIDE’S MOTHER’S BEST FRIEND

For those who are not close to Mrs. Shade Adeoluwa, the bride’s mother and Mrs. Bolanle Mohameed popularly called Mommy Bobo, it would be hard to tell that the two are not sisters because they  share a strong bond and have been friends since childhood, not to mention the fact that  they look alike. She is also referred to as mother of the bride. This explains why she was not just supportive, but fully involved in the wedding. Her son, Bobo, shed tears of joy  when the bride came in and he saw her looking beautiful under her veil.

Spouses of Ogun State government functionaries association otherwise known as SOGSFA , where the bride’s mother Mrs Adeoluwa, is a member, were fully on ground to celebrate one of their own . They also stole the show when they stepped on the dancing floor.

ABOUT THE COUPLE’S DAZZLING OUTFITS

Looking at the couple’s outfits, one can tell they are both stylish.  For their first outfit, it was all-bronze colour affair. The bride’s attire was fully stoned and her veil has a shimmer, which added style to complete the outfit. The groom’s agbada was also frilled. The bride’s second outfit was a lovely blue green dress, while the husband wore a mint green agbada of Guinea brocade.

The event was planned by B Signature Events, decor was done by Subtle Elegance, Malas Food and  Super Meals served finger, licking delicacies. Royal Butler was in charge of expensive wine and spirit, Whike Todamate and La Bash did cocktail, later in the night Sean B served Fish and Chips and Asun.