Oba Charles Ibitoye, the Olomu of Omu-Aran in Irepodun Local Government Area of Kwara, has joined his ancestors. His demise was confirmed to newsmen in Omu-Aran on Saturday by Chief Festus Awoniyi, the Petu of Omu-Aran.

Awoniyi broke the news of the monarch’s passage shortly after the meeting of the Olomu-in-Council on Saturday in Omu-Aran. Oba Ibitoye was reported to have died at the age of 65 years after a brief illness.

Newsmen report that the rumour of his death which became viral on social media early on Friday, had thrown the community into atmosphere of tension and anxiety. Awoniyi disclosed that the Elemosho of Omu-Aran, Chef Jimoh Olaiya and his team had been instructed to announce and move round the town to clear the markets as a tradition.

According to Awoniyi, a curfew has been imposed from 9.00 p.m and 5.00 a.m with effect from Saturday. “We just finished our meeting at the palace where the news of Olomu’s demise was officially broken.

“There will be no buying and selling for three consecutive market days and a curfew imposed as a mark honour for the late Olomu,” he said. Oba Ibitoye, who hailed from Ikoja Compound in the town, is from Ijawusi Ruling House. He ascended the throne in January 1993 after the demise of Oba Suleiman Durotoye Abegunde. 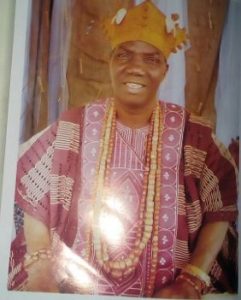 The monarch, who was a retired civil servant with the State Ministry of Finance, is survived by his wife, Olori Omowumi Ibitoye and four children. In his reactions, Chief Bisi Adeyemi, the President, Omu-Aran Development Association (ODA), said that the association was in the process of notifying the council chairman and the State Governor for official announcement. Also reacting, Chief Jide Adebayo, a community leader and former Executive Director of NAN, said that Oba Ibitoye would be missed for his exemplary leadership style.

“He is a kind hearted, industrious and a leader per excellence. “He was always concern and passionate about peace, unity and development of the community,” Adebayo said. NAN

Olomu of Omu Aran is dead was last modified: December 3rd, 2017 by Reporter