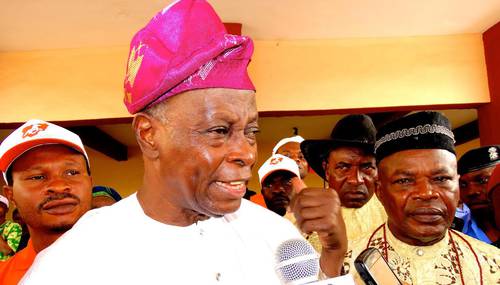 A former Secretary to the Government of the Federation, Chief Olu Falae, has charged the Oyo State Governor-elect, Engineer Seyi Makinde, to resuscitate the policy of the late sage, Chief Obafemi Awolowo.

Falae gave this advice when he visited Makinde at his Ibadan residence on Tuesday.

He advised the newly-elected governor to reset the template instituted by late Obafemi Awolowo in the South-West.

Falae, who use to be the national chairman of the Social Democratic Party (SDP), said only a determined and focused person can help reposition the region based on good governance.

He said, “Since the demise of Obafemi Awolowo, we have not had a governor to set a new template, the template Obafemi Awolowo set in his 9 years of government as the Premier of Western Nigeria.

“We need to reinvent that template so that we will be more in accordance with the challenges and priorities of today, and I have no doubt whatsoever that Engineer Seyi Makinde by the grace of God is the man chosen by providence to set that for the Yoruba race.”

He also commended Makinde over what he described as his courageous and resilient spirit over the years by remaining focus after suffering setbacks in his political career.

He advised those who are still aspiring to go into politics not to give up, adding that “Seyi never gave up, he will go back to the drawing board, come to Akure and seek for advice on how to go about his next step. Today God has crowned his efforts”.

Makinde, while responding, appreciated the elder statesman for the visit and support extended to him so far.

He reiterated his commitment for regional integration, and restated his resolve to consult the elder statesman, imploring him that whenever he is passing through Oyo state “see us and we will host you as you give us your advice on how to move the state forward”.

SHOCKER! Marriage Vows, “For better for worse” Is A Curse – Bishop Oyedepo