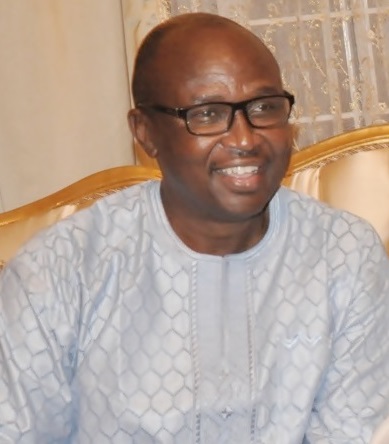 Many people don’t know that real estate guru, Otunba Olumide Osunsina has strong Ibadan roots. Though his father is from Abeokuta his mum is from Ibadan. Just as he has strong links with Abeokuta, he is also deeply linked with Ibadan. His mum comes from the Oja Oba area in Ibadan.

No wonder the Olubadan of Ibadan Oba Saliu Adetunji honoured him two weeks back with a big title, the Agbaakin Bashorun of Ibadanland. Osunsina was one of thsoe eminent Nigerians honoured as part of Olubadan’s 1st year coronation anniversary.

When City People spoke to Otunba John Olumide Osunsina he was full of appreciation to the Olubadan for recognising what he calls his modest efforts. Unknown to many people Osunsina who is CEO of MEGAMOUND Investment company, a Real Estate company is a big investor in Ibadan.

“I love Ibadan so much. Ibadan is my 1st city in Nigeria. I grew up knowing the city. I spend a lot of my leisure time in Ibadan. When I was growing up I spent a lot of holidays in Ibadan. Though my dad is from Abeokuta, my mum if from Ibadan. My mum was born in Ojo Oba area to be specific we are the Iba Oluyole. When you say Ibadan, the Ibadan people are Iba Oluyole.”

“That is actually my family name, Iba Oluyole. So I can claim very good links to this city. Ibadan is a special city in so many ways. We have always known the potentials of the city. I am very glad to have been titled and recognized for what I have done for the city. I thank Olubadan, Kabiyesi so much, for recognizing our efforts. The reason he did it is to encourage other people to come and do as much as they can for the city.

Did he grow up in Ibadan? No. I didn’t actually live in Ibadan. But I spent quite a lot of my holidays in Ibadan. We own quite a few properties in Ibadan. My mum is from Ibadan. We have always owned properties there. I am not surprised that I am doing exactly the same thing she did.”

I have quite a lot of investments in the town. And I will continue to do that Ibadan is supposed to be an auxiliary town to Lagos.”

“No I won’t call it that. I think it should be the other way round. Lagos should be an auxillary to Ibadan. It has a rich history behind it. And of course we are extremely grateful to what is happening right now. With what the federal government is doing in terms of infrastructure. The rail link is extremely important. Lagos-Ibadan expressway has been a disgrace. Its sad that the 2 most important cities in Africa cannot be serviced by proper roads. But I am happy we are getting to the end of the stress right now from the construction that is going on, on the expressway right now. With the road completed and the rail now. With the road completed and the rail link, I want to assure investors that Ibadan is a very good place to put your money. Investors should please come in there invest.

He has 2 big hotels in Ibadan. Why did he choose to invest in the hospitality sector?

“Yes I have two big hotels in Ibadan, namely Carlton Gate Hotel, Idi-Ape, GRA, in Ibadan and Carlton Gate Exclusive on Secretariat road, very close to UCH. It is deliberate that I chose hospitality. Because of course, I also use that industry. I was not happy with the quality before we came into the industry. I felt people were being taken for granted. We knew there were opportunities there when I saw what was on the ground. So, I knew we needed to do some kind of improvement.

Does he play big in the real estate sector in Ibadan??

Oh yes we do. We are quite big. We are a major player in the real estate sector in Ibadan because we have just finished building a very beautiful mall, Grand Mall. It’s a very nice mall just to increase the capacity of modern shops in the city.

We are also the owners of Carlton Gate Estate in Akobo which is a very, very beautiful modern laid out estate. We have considerable investments in Ibadan in terms of real estate and also in Tourism. The Mall is located on Bodija road, if you are going towards the University of Ibadan. Its very modern. This is our contribution to commerce in Ibadan.”

Otunba Osunsina has vast experience in various challenging business endeavours including Dredging and under water services, Financial Intermediation, Construction and Real Estate Management. He has steered the wheels of Megamound Investment Limited as its Managing Director/CEO since year 2000 and has nurtured it into a multi-billion Naira diversified institution.

He has worked in various states of Nigeria as a consultant on water rehabilitation and street lighting under World Bank and Africa Development (ADB) financed projects. He was one of the pioneer Real Estate developers at River Valley Estate in Ojodu, Lagos and has several properties within the Estate and its environs including the Omole Shopping Complex with a current market value of N100 million.

His involvement with Dredging started with the NICON Town Estate project along the Lekki-Ajah axis. The estate today is one of the best in terms of infrastructure in the country. The sand filling was financed through the involvement of Megamound Investment Limited and Indemnity Finance Limited and is valued at N4.5 billion. He then went on to develop the beautiful and classy Carlton Gate Estate on Chevron Drive with land space of 28.31 Hectares, brilliantly structured into 231 Residential plots, fully service with the most modern infrastructure. He also owns the Elegushi Royal Heritage Estate located along the Lekki Peninsula.

He has also has Kings Court Estate located within the Oniru Estate in Victoria Island Annex, Lagos. This estate consists of 2 blocks of 14 flats each on 5000sqm valued at N1.5 billion. He is also the Managing Director of Lekky County Homes in partnership with Mayfair Building Society. This estate is being developed by Megamound Investment Limited and comprises of 700 Residential plots including over 350 Homes. The estate is located at Ikota in the Lekki area of Lagos State and is worth about N3.5 billion.

Otunba Osunsina has contributed in immeasurable ways to the provision of affordable houses to the average working class sector in Nigeria despite the difficulties being experienced in the Construction sector and he is worthy of commendation. In recognition of this, Megamound Investment Limited was issued the West African Excellence Award in Property Development and Marketing Services by the Institute of Direct Marketing of Nigeria in 2007. The company was also presented with on Award of Excellence by Lagos Housing Fair for its immense contribution to the development of Nigerian Housing Industry in May 2010.

Otunba is a Fellow of the Academy for Entrepreneurial Studies, Nigeria. The Nigerian Institute of Quantity Surveyors (Lagos Chapter) recognised his contribution to the success of their 1st Distinguished Lecture Series in July 2009 by presenting him another award. He was also honoured by the Yoruba Heritage award in the category of Corporate Property in the United Kingdom on the 10th of September, 2010. This is in recognition of his contribution, development and achievement towards the Yoruba community in the United Kingdom.

He was also conferred with the chieftaincy titles of Bobaselu of Itireland and Otunba Loro of Ajiranland in recognition of his contribution to the development of the communities. Olumide Osunsina was born in 1963, in Abeokuta, Ogun State, Nigeria He had his secondary education of the famous Barewa College, Zaria and also at Abeokuta Grammar School where he took his WAEC and finished with Division 1 in 1978. He then proceeded to Ahmadu Bello University, Zaria, Kaduna State where he studied Building Technology. He graduated with Distinction in Diploma in Business Administration at the University of Lagos and has a Master’s of Business Administration from Abubakar Tafawa Balewa University, Bauchi. He is currently studying for an Msc in Real Estate from the University of Reading in the UK. He is happily married to a pretty lady called Desiree. They are blessed with lovely children.