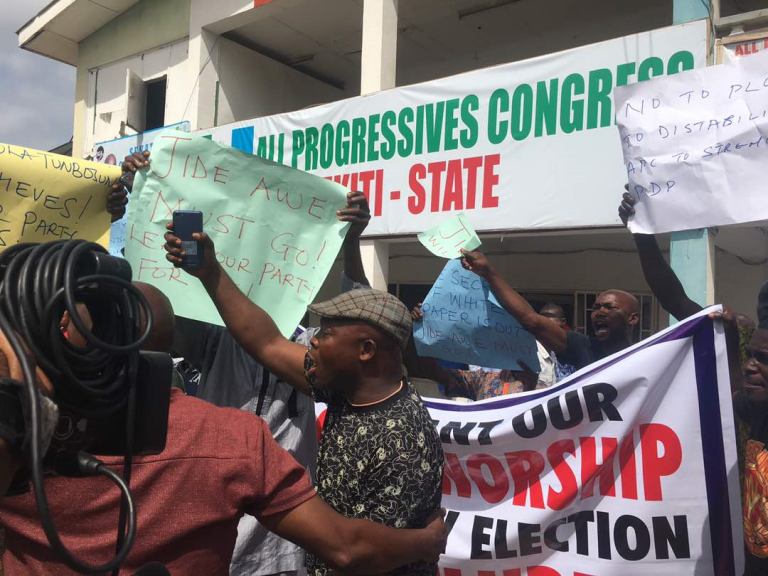 A faction of the ruling All Progressives Congress, APC, in Ondo state, Unity Group(UG) has dragged the executive committee of the party to the Federal High Court, Abuja, seeking rejection of list of candidates for December 1, local government poll in the state.

Joining in the suit as defendants are the Independent National Electoral Commission (ODIEC), Attorney-General/Commissioner for Justice, the state APC Chairman, Ade Adetimehin and National Chairman of the party, Adams Oshiomhole.

According to The Nation, the development was the fall-out of the controversial congress from Ward to National held between May and June 2018.

During the exercise,some members were allegedly denied access to party forms to participate in the Congresses.

At a media briefing in Akure, the state capital on Tuesday, the chairman of the group, Idowu Otetubi supported by its Secretary, Gani Muhammed recalled that they held parallel congresses from Ward to State level in all the 203 wards and 18 Local Governments of Ondo State.

According to them, they recently produced their executives despite persecution, intimidation, and maiming of their members and some reporters at the BTO Hall in Akure where they had the State Congress.

Otetubi said “After the Congress, we submitted the result to the National level of the Party and copied Independent National Electoral Commission (INEC)but unfortunately, the former National Chairman, Chief John Odigie-Oyegun did not allow our list to see the light of the day.

“We have continued to carry on as a Party Executives that emerged following the party congresses conducted in substantial compliance with the APC Constitution and guidelines.

He said they had continued to defend the policies of the APC led government at the National Level and continued to mobilize to the party on daily basis.

The group, however, commended the new leadership of the party led by Adams Oshiomole for the good job it had been doing.

It said “We are elated that the NEC had adopted Direct Primary at all levels to nominate candidates for the 2019 general election. We are not unaware of the unpatriotic stand of some of our governors who have been in the forefront of kicking against the most democratic system of nominating candidates.

“We are not surprised at the stand of those handpicked executives in the states. We know that they are afraid of any direct contest. All they want is to be handpicked as candidates of the party which shall be counter-productive.

The group which claimed of having 75 percent of APC in Ondo State said it would do everything to resist the imposition of unpopular candidates for the 2019 election.

It said “We are aware of an attempt to conduct Local Government Election in Ondo State. It is very unfortunate that only Aketi’s group had access to the nomination forms as members of our Unity group have also been illegally excluded.

“We wish to state that the Adetimehin led executive in Ondo State is not competent to submit a list of candidates to Ondo State Independent Electoral Commission (ODIEC) because it did not emerge in a Congress done in accordance with the party guidelines.

However, Adetimehin insisted that those calling themselves Unity Group members are not APC members, saying they are acting as spoilers to the ruling party but would not succeed in their mischief.