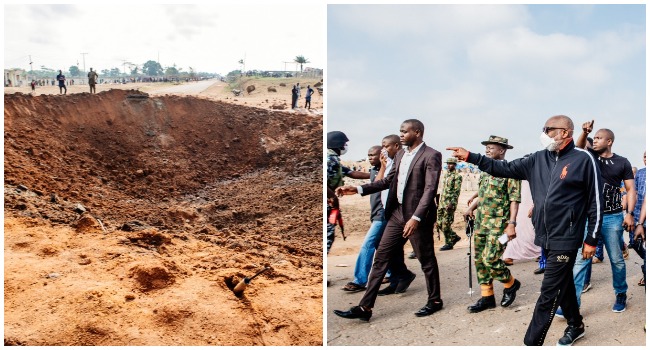 Ondo State Governor, Rotimi Akeredolu on Saturday visited the scene of an explosion that rocked a suburb of Akure, the state capital.

Residents of Iluabo were shocked by an explosion that occurred in the area at about 1 am on Saturday.

The explosion made a large excavation on the road and the impact was felt kilometres away from the scene. Residents trooped towards the scene.

According to the State’s Commissioner of Police, Undie Adie, the explosive belonged to a construction company based in Edo state.

The Governor confirmed the commissioner’s explanation, adding that the convoy had been transporting the explosives to “a storage facility in a neighbouring state.”

While en-route, “security personnel and other individuals transporting the ordinances noticed smoke from the vehicle,” the Governor added.

“After several attempts to extinguish the resulting fire failed, the vehicle and its consignment ignited causing a massive explosion that was felt in Akure and its environs.”

Akeredolu noted that efforts are still being made to ascertain if there are casualties.

“Following my visit to the scene, I have directed that the area be cordoned off to allow the explosive ordinance department/bomb squad to extricate the vehicle buried underground because it is unclear if there are still explosives that are yet to be detonated.

“Everything is under control and I will be updating the public on any new developments.”