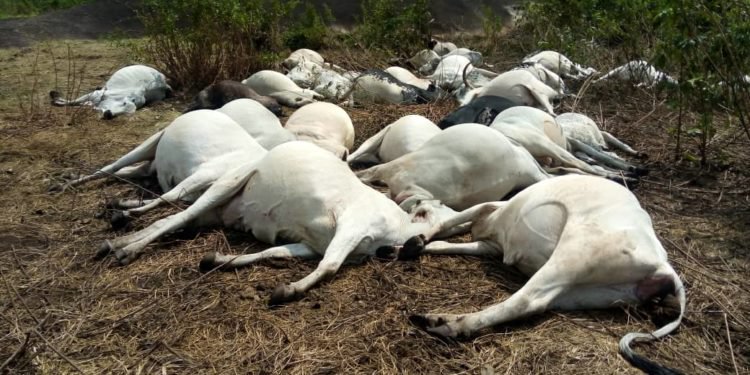 News has emerged on Tuesday concerning the mysterious death of 36 cows on Okeowa hill in Ijare, Ifedore Local Government Area of Ondo State.

It was learnt from indigenes of the town that the herders killed a big python on the Okeowa hill.

The killing of the snake, according to them, is a taboo and against the tradition of the community.

Thirty-Six cows owned by some herders died mysteriously in the community after they were said to have been struck by lightning on Saturday.

The traditional ruler and people of the community confirmed that the cows died after they desecrated the Okeowa hill, where sacrifice is made every year by their monarch.

But a source in the town said the cows died because the people abandoned the annual ritual at Okeowa hills.

“When you get to the palace, ask them when last they worshiped on Okeowa,” he said.

The Miyetti Allah Cattle Breeders Association of Nigeria in the state described the death of the 36 cows as an act of God.

Its Chairman, Bello Garba, said members of the association had visited the area to ascertain what was responsible for the death of the cows.

He noted that their findings showed that the cows were not poisoned, as being insinuated in some quarters.

Garba said his members would always live in peace with the host communities.

He added that the association would continue to sensitise its members on the need to avoid sacred areas when grazing animals, to prevent a recurrence.

Ondo indigenes reveal mystery behind the death of 36 cows was last modified: September 25th, 2019 by Reporter