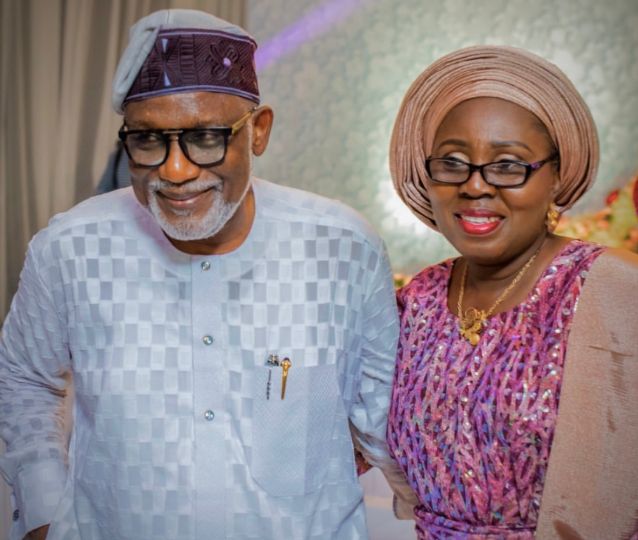 Reactions have continued to trail the flouting of the lockdown order by Mrs. Betty Anyanwu-Akeredolu, wife of Ondo State Governor, Rotimi Akeredolu.

The governor’s wife, who had been in Imo State for several weeks, returned to Akure, the Ondo State capital, yesterday, raising some dust among residents of the state for going against the ban on inter-state movement.

In April 2020, President Muhammadu Buhari had ordered a nationwide curfew from 8 pm to 6 am and also put a ban on non-essential inter-state travels until further notice as part of measures to curb the spread of Coronavirus.

Ondo State Governor Rotimi Akeredolu and his wife Betty Anyanwu-Akeredolu
Speaking with SaharaReporters over the issue, Mr Adebayo Iyiola, a resident of the state, described the flouting of the inter-state movement ban by the Ondo governor’s wife as disturbing.

He said, “The governor’s wife should know the law more than anyone else and it is just sad that same people making this law are also the ones flouting it with impunity.”

Abiola Owonola, a human rights activist, in his reaction expressed disappointment at the situation.

He said, “You can imagine the wife of a governor whose husband is the number one law officer of the state flouting the law and people expect us to just look away.

“The same government is ordering the arrest of people who flout the order and asking the police to send back those entering the state during the lockdown.

“This is a country where the law is like a cobweb that ties the weak but frees the strong. How do we explain such effrontery of the governor’s wife or do they mean we are not equal before the law. We demand an explanation.”

Another concerned resident of the state and activist, Wande Ajayi, disclosed that it would not be the first time that the wife of the governor would be flouting government orders in Ondo.

Ajayi noted that no individual irrespective of position or status in the country should be above the law if the government was truly fighting the pandemic.

He called on Governor Akeredolu and his wife, Betty, to apologise to the people of the state for flouting the inter-state movement ban.

Special Assistant on Media to the governor’s wife, Tobi Fademi, could not be reached for comments when SaharaReporters reached out to her.

A spokesperson for the Ondo State Police Command, Tee-Leo Ikoro, did not also respond to calls put across to him on the issue by our correspondent.