Home International One Teenager, 38 Others Found Dead Inside Shipping Container In UK
International

One Teenager, 38 Others Found Dead Inside Shipping Container In UK 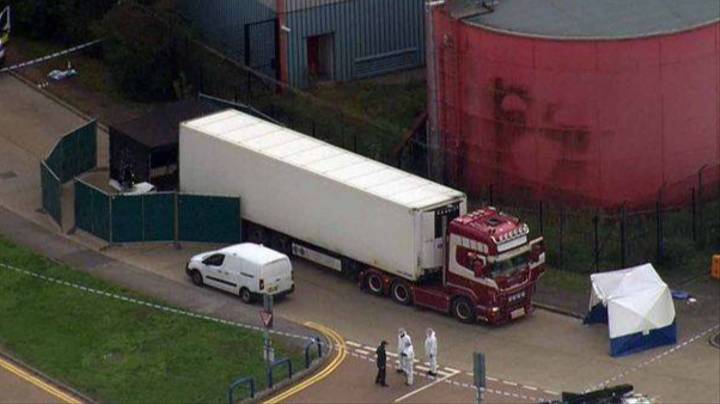 The corpses of 39 people, including a teenager, have been found in a shipping container in Essex, a town not too far from London.

According to BBC, the lorry driver, a 25-year-old man from northern Ireland, has been arrested on suspicion of murder.

The lorry, found at Waterglade Industrial Park in Grays, is believed to have come from Bulgaria.

The police said the vehicle got into the UK via Holyhead, Anglesey, on Saturday.

Pippa Mills, deputy police chief, said they were working to identify victims, adding that it is a “lengthy process.”

Seamus Leheny, Northern Ireland policy manager for the Freight Transport Association, said if the lorry had come from Bulgaria, getting into Britain via Holyhead was an “unorthodox route”.

Leheny said: “it might be seen as an easier way to get in by going from Cherbourg or Roscoff, over to Rosslare, then up the road to Dublin”.

The National Crime Agency said it had also sent officers to assist and identify any “organised crime groups who may have played a part”.

Reacting to the incident, a spokesman for the Bulgarian foreign affairs ministry said there is no indication yet as to where the victims may have come from.

“There is also no indication of the nationality of the human bodies found in the truck,” he said.

But Prime Minister Boris Johnson said the home office would work with the police in determining what happened.

“I know that the thoughts and prayers of all members will be with those who lost their lives and their loved ones,” Johnson said.

“I’m receiving regular updates. The Home Office will work closely with Essex Police as we establish exactly what has happened.”

One Teenager, 38 Others Found Dead Inside Shipping Container In UK was last modified: October 23rd, 2019 by Damilare Salami

Gay People are to Blame for Hurricane...