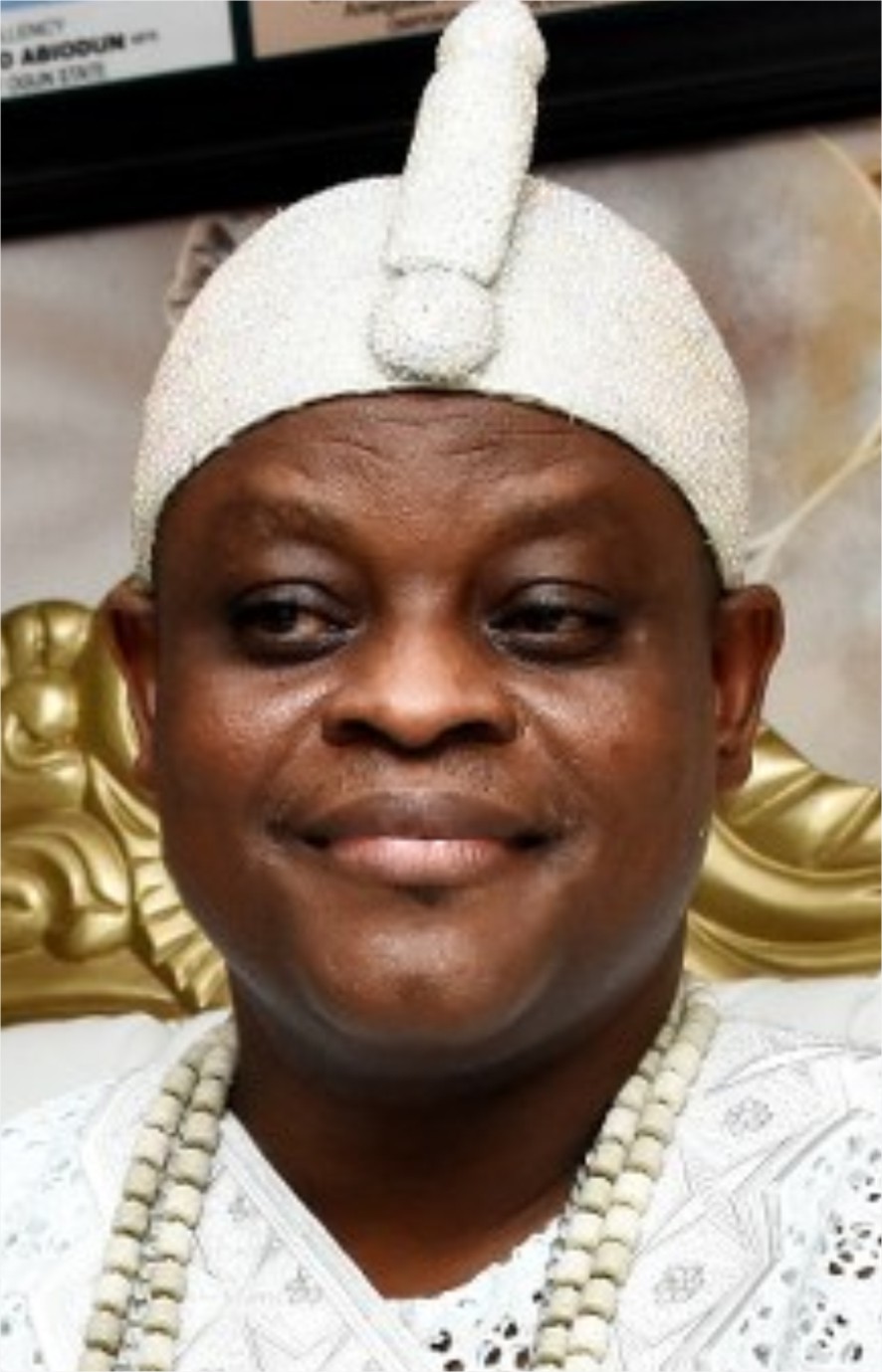 •The Story Of Alayeluwa, Oba OLANIYAN

Sunday, 5th September, 2021, marked the 1st Coronation Anniversary of His Royal Majesty, Oba Yisa Olusola Adeniyi Olaniyan, the Onipokia of Ipokia kingdom. He took the opportunity of the coronation to confer honorary chieftaincy titles on eminent Nigerians. He also held N5 billion fund raising for Ipokia Community Development Projects. His Royal Majesty, the paramount ruler of Ipokia in local government of Ogun State was born on September 5th 1970 to the family of the Late Prince Hamzat Akanbi OLANIYAN of waye Dodo Ruling House and Madam Muyibat of IYAN at lIashe Quarters of Ipokia.

He had his elementary education at United African Methodist Church Primary School, Ipokia, from 1976 to 1982. He proceeded to Community High School, Ipokia from 1982 to 1987 where he graduated in flying colours. During the time, he was one of the school prefects and a reputable student leader. Incidentally, the academic responsibilities as well as other communal engagements prepared him for higher leadership tasks. In 1988, after his secondary education, he moved to live with his uncle in Lagos. While seeking admission into higher institution, he applied and was offered a job at Nigerian

Aviation Handling Company (NAHCO) at Murtala Muhammed International Airport, Ikeja, in 1989, and he was deployed to Lufthansa German Airlines Ground Operations Department, where he served meritorious. In his quest for higher education, he got admission into Lagos State Polytechnic, Isolo campus in 1995. He had barely started his first semester examination when he relocated to the United States of America (USA) in 1996 where he resided for 23 years before returning to yield to the call to serve Ipokia Kingdom.

While in the United States, his penchant for learning made him apply to The University of Houston, Downtown, where he obtained Bachelors Degree in Criminal Justice. He also obtained various certifications in Quality Assurance. Now he has almost twenty years experience in the practice. This is a field he chose to work while attending school and continued to develop in even after schooling. He was barely rounding up his second Degree when the Royal Compass beckoned on him and he had to move to Nigeria to answer the clarion call for the advancement of Ipokia Communities and beyond.

Oba Olaniyan also worked with an Oil & Gas Company called Emerson Process Management as a Quality Control Inspector in Houston Texas, United States of America. His passion for entertainment led him to start an entertainment company about 19 years ago, and then moved on to creating an annual Awards event in 2015 under the brand of Afro-Heritage Broadcasting.& Entertainment Awards ‘AHBEA’ with the support of some notable individuals in the Nigeria entertainment industry. This award event was created to honour and appreciate African entertainment veterans & other professionals in Africa who have excelled in their chosen fields. In the last five years of putting it together, AHBE Awards has had the honour to celebrate top entertainment gurus like Prince Bisi Olatilo, Tade Ogidan, Pete Edochie, Hon Dayo Adeneye D1, Madam Idowu Philips, Madam Liz Benson, Zack Orji, Fred Amata,

Raymond Ofula from Kenya and many more in Houston Texas, the USA. AHBE Awards continues to grow faster than expected among other African entertainment award events both at home and in the Diaspora development.

As an advocate of Community , Kabiyesi Olaniyan played prominent roles in the Diaspora Yewa Community where he served as the National Public Relation Officer of Yewa Descendant Union, North America (YDU NA), the post held for two terms. His Royal Majesty is also the Executive Director and Co-owner of a renewable energy company called NSB worldwide Incorporated and operating both in the USA and Nigeria. He is married to Olori Folasade Olaniyan, and the union is blessed with two children – Olusola Adeyola Olaniyan Junior & Ayobami Adewale Olaniyan. As a socialite and an African arts & entertainment promoter, he won the award of the Best Promoter in the USA in 2014; and within a short time on the throne he has received the award of the most influential king, in 2021. Kabiyesi loves to travel and he has been privileged to have visited the United Kingdom, Canada, China and Japan among others. His hobbies include watching sports basketball, football, listening to music and reading.

His Royal Majesty, Oba Yisa Adeniyi Olaniyan,“ was called to seclusion on May 12,2019. This followed the election of Oba Yisa by the Five (5) kingmakers who picked him to survive the immediate past.

Eight (8) princes of the Iwaye Dodo Ruling House vied for the stool of Onipokia and at the contest, the kingmakers unanimously agreed to approve the candidacy of the now Oba Yisa Sola Adeniyi Olaniyan to ascend the throne. Incidentally, twin events of political transition in Ogun State as well as the global pandemic (Covid-19) that ravaged Nigeria and the entire world resulted in His Royal Majesty, staying in seclusion (Ipebi) for fifteen (15) months. His seclusion was longer than necessary, but he withstood the pressure and challenges, and we give Almighty God all the glory!

Significantly, the people of Ipokia stood by him spiritually, physically, morally and with all their God-given resources th roug hout the time he was in seclusion and even after. They were so glad to have him selected as their Oba, such that they added lIufemiloye 1 to his royal title. Immediately after the seclusion and other traditional rites, numerous courtesy visits were paid to him from traditional rulers, political leaders, entertainment icons, financial gurus and others thronged Ipokia to visit Kabiyesi.

Oba Yisa Adeniyi Olanyan was officially installed and given staff of office as the 46th Onipokia of Ipokia Kingdom on the 12th of August, 2020 by His Excellency, Executive Governor, Ogun State, Prince Dapo Abiodun (MFR). The day was greatly memorable in Ipokia as the town was agog with joy and fanfare.

The Coronotion took place on September 5, 2020, with great celebration as people from all walks of life were present at the historic event. It was, indeed, a new beginning for Ipokia. It is worthy to note that the ascension of Oba Yisa Adeniyi Olaniyan has reinvigorated the confidence of  people of Ipokia in the pursuit of socioeconomic development of the ancient town. This has engineered positive image of Ipokia in the comity of towns within the state, Nigeria and the international community at large. His Royal Majesty has awakened the zeal of the people of Ipokia to make the Kingdom a priority

in their lives. Also, indigenes in diaspora have begun to massively reconnect with their ancestral homes to further contribute to the growth of the Kingdom.

As a private citizen, Kabiyesi supports the vulnerable and less privileged people from time to time with their medical bills, educational pursuits among others. He is always looking for avenues to improve on the standard of living in Ipokia. In the last one year on the throne, Oba Yisa Adeniyi Olaniyan has really engineered more love and unity of purpose among the people of Ipokia. This is evident in the revival of the celebration of Opo Day, a cultural carnival that has been suspended for the last fourteen (14) years. Kabiyesi was instrumental to the colourful Opo Day held in thefirstthree days of Year 2021 and he has made it a priority to ensure that Opo Day celebration is held annually to showcase the rich culture of Ipokia to the world. Peace is a sine qua non to development, with this understanding, Kabiyesi as an Ambassador of Peace has equally encouraged mutual trust and understanding among the residents and neighbouring communities as well as government agencies operating within and outside Ipokia Kingdom. Kabiyesi lived in the USA before his return and subsequent ascension to the throne. He left his comfort zone to heed the call of his beloved kinsmen. However, the good name he earned while abroad is coming to bear positively on the socioeconomic development of Ipokia town. His last visit to the USA after months of seclusion and eventual installation as Onipokia has attracted investors from outside Nigeria to Ipokia. People in the diaspora are now looking at the feasibility of investing in Ipokia by tapping into the various economic opportunities that abound in the community especially the surrounding water.

Kabiyesi was also at The National Assembly in Abuja to support the public hearing for Ipokia University of Science and Technology Bill, given that there is abundant land suitable for the project. He was there on persona1 conviction to play host to the educational intervention.

Most recently, he was on a courtesy visit to Arole Oodua, Olofin Adimula, Ooni Adeyeye Enitan Babatunde Ogunwusi, Ojaja “ to accord due respect and reestablish diplomatic relationship with lIe-lfe, the ancestral home of the Yoruba. Oba Yisa Adeniyi Olaniyan at the moment is working on developing a blueprint that will identify and clearly map out achievable ways and practicable strategies for human, social, economic and cultural development of the ancient town such that it will assist and support the government in catering for the welfare of the people. To achieve this noble and patriotic objective, His Royal Majesty has set up various committees under the umbrella oflpokia Development Project Committee to generate ideas and come up with a blueprint. Through a pilot and live study survey, the sum of Five Billion Naira (N5,000,000,000) for a five year intervention is targeted through fundraising to see to the realization of what His Royal Majesty called IPOKIA COMMUNITY PROJECT (a long-term project that will be achieved in phases). This coronation anniversary is also a step in the direction towards realisation of IPOKIA COMMUNITY PROJECT. All voluntary and philanthropic donations in the installation of Traditional and Honorary Chieftaincies shall be tailored towards the project.