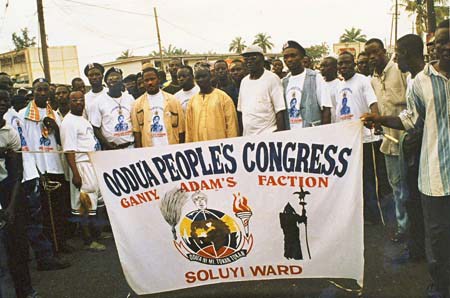 The Oodua People’s Congress (OPC) on Monday urged the Federal Government to urgently find lasting solution to the alleged attacks and wanton killings by herdsmen in the country.

A statement by Mr Yinka Oguntimehin, the Publicity Secretary of the socio-cultural group, described last Sunday’s attack on the farm of Chief Olu False in Ondo State as wicked, rude and shocking.

Oguntimehin, a legal practitioner, said that such acts were inimical to the unity, love, peace and progress of the country.

“The attacks were deliberate attempts by the suspected herdsmen to undermine the security of the country.

“With the recent attacks, it is a strong signal that Nigerians, particularly, farmers are not safe in their farms.

“And this is not too good for the federal government’s drive and policy on diversification and promotion of agriculture as a major alternative for oil.

“The attack also came at a time when Nigerians are still mourning the gruesome murder of 73 people in Benue and several others in other states.

“The Federal government must find lasting solution to the continuous attacks and wanton killings in the country,’’ Oguntimehin said.

The scribe of the Pan Yoruba group urged the federal government to curtail the herdsmen’s activities and address the present security challenges in the country.

“As a group that is poised to protect the interest of the Yorubas wherever they live in the country, we believe strongly that it is the duty of security agents to protect the lives and property of the citizenry.

“We urge the federal government to nip the unwholesome activities of these herdsmen in the bud.

“The herdsmen are not ghosts. They are Nigerians like us and they must be stopped now before it degenerates into further attack and counter attacks.

“It is sending the wrong signals that our security apparatus may have failed in the discharge of their responsibilities,’’ the OPC spokesman added.