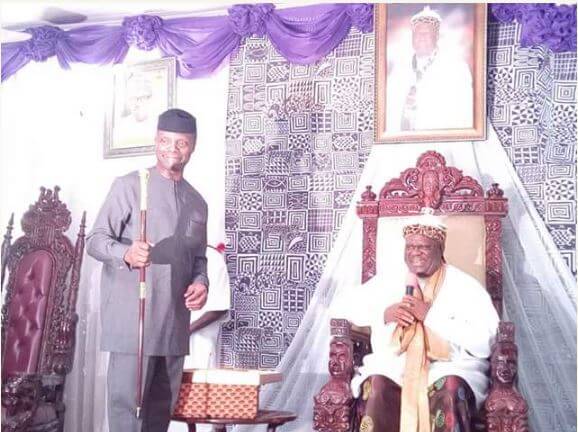 All Progressives Congress chieftain, Pastor Yemi Osinbajo has been welcomed wholeheartedly in the Southern part of Nigeria with a traditional honour.

The Acting President, Professor Yemi Osinbajo was conferred with one of the highest traditional titles of the Efik Kingdom, Ada Idaha Ke Efik Eburutu (traditional ruler in Efik kingdom) by Obong of Calabar, Edidem Ekpo Okon Abasi Otu V on Thursday when he visited the traditional ruler at his palace in Calabar.
The Obong of Calabar called on the Federal Government to fulfill the campaign promises made to the people before the elections.
He also asked all political office holders to unite in building one Nigeria irrespective of political affiliations.Osinbajo called for unity amongst Nigerians as a panacea for national growth and development.
See more photos: