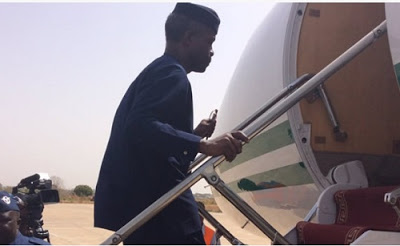 Less than 24 hours after the deadly attacks by the Boko Haram insurgents in Maiduguri, the Borno State capital, the Acting President Yemi Osinbajo, today, defied the presumed security threat, paying a one-day working visit to the troubled town.

The acting president, who is in the state to flag-off the distribution of 30,000 metric tonnes of assorted grains for the Internally Displaced Persons, (IDPs) in the north-east, landed at the Maiduguri International Airport via a presidential jet.

The acting president was received by Borno state Governor, Kashim Shettima, members of the state executive council, traditional rulers and politicians.
It was observed that security was beefed up across the town, with heavily armed security personnel from the army, navy, airforce, police, DSS, immigration and other para-military agencies deployed at the major roads and streets.

Similarly, several Armored Personnel Carriers, APC, armored tanks were equally stationed in all the roads were the Acting President is expected to pass, with assault helicopters and military fighter jets providing aerial surveillance.

The town was shut down as commercial and social activities were scuttled.

Shortly after his arrival, Mr. Osinbajo headed to the palace of Shehu of Borno, Alhaji Abubakar Garbai El-Kanemi, where he paid a homage.

He told the monarch that the distribution of the grains was part of the Federal Government intervention to address the feeding problem of the IDPs.

The acting president later moved to the store of the National Emergency Management Agency, (NEMA) to inspect the grains, even as he proceeded to the Bakassi IDP camp for the flag -off of the distribution programme.