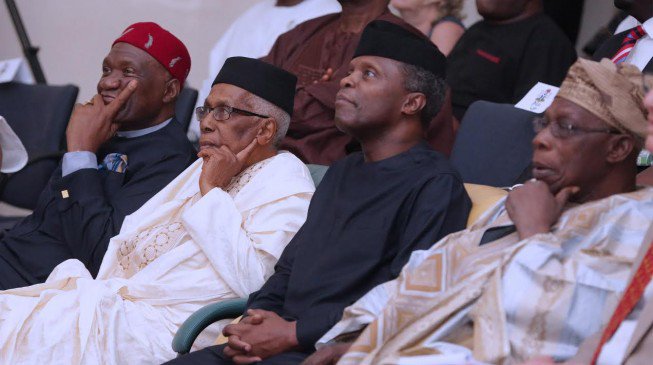 The Acting President, Yemi Osinbajo on Tuesday met with leaders of thought in the North, including the Arewa Consultative Forum.

The meeting held behind closed doors at the Presidential Villa.

The parley is said to be in connection with the recent ultimatum issued to Igbos residing in the North to leave the region on before October 1st.

Others are former governor of Sokoto state, Aliyu Wamako, former Deputy Governor of Plateau state, Pauline Tallen, Publisher of Leadership newspapers, Sam Ndah-Isaiah, Paul Unongo, Tijani Ramalan,Editor in Chief of Daily Trust among others.
At the meeting, Osinbajo threatened to deal with those behind the recent quit notice given to Igbos resident in northern part of Nigeria.

He said the government would take very seriously any attempts to cause violence or disrupt the peace of the country.

He said, “As a government, we are determined to ensure the unity of the country along the lines of our Constitution and I want to say that hate and divisive speech or divisive behaviour where it is illegal will be met with the full force of the law.

“I want to ensure that there is no doubt at all that it is the resolve of the government that none will be allowed to get away with making speeches that can cause sedition or that can cause violence.

“So I want to emphasize that government will take very seriously any attempts to cause violence or disrupt the peace of this country. And that is very important because you cannot control violence once it begins.”

Osinbajo likened violence or hate speech to a stone that is thrown in the marketplace which will hit targets that will be deadly.

“These days, wars do not end and I am sure that those who have seen or experienced war in any shape or form will not wish it on their worst enemies.

“This is not a time to retreat behind ethnic lines, moments like this are not for isolating ourselves.

“I want to urge all of us here and the entire Nigerian populace to come together and work together,” he appealed.

Osinbajo is expected to meet with leaders from the South East separately before he will eventually meet with both groups together.

His Senior Special Assistant on Media and Publicity, Mr. Laolu Akande, confirmed this in a series of tweets on his Twitter handle