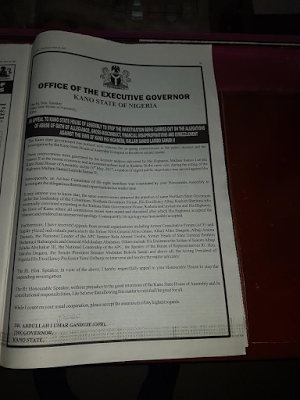 On May 22, after receiving a letter from the State Governor, Abdullahi Ganduje, the Kano State House Assembly called off its investigation into allegations of misappropriation of funds and other infractions against the Kano Emirates Council.

If you recall, the Emir of Kano, Muhammadu Sanusi II was accused of financial recklessness, with an allegation stating that he spent as much as N6 billion since he ascended the throne in 2014.

In the letter read during to the house by the Speaker, Kabiru A Rurum, it was then reported that the governor urged the Assembly to suspend its investigation following pleas by former leaders, traditional rulers and various statesmen across the federation.

The letter has now been shared publicly in a newspaper and the names of the very influential Nigerians who appealed have been revealed.

How I got my nickname Iya Ibadan,...