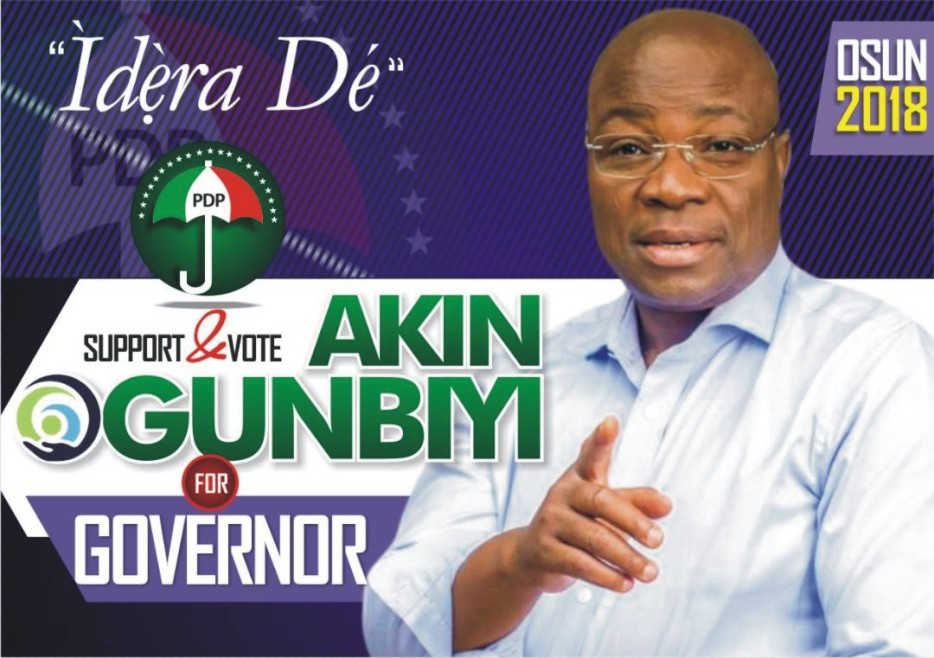 Dr. Akin Ogunbiyi, a gubernatorial aspirant and the first runner-up in the recently held Osun PDP governorship primaries, is set to run for Osun West Senatorial seat come 2019 and this is authoritative. He will be contesting the seat currently occupied by Senator Ademola Adeleke who won the bye-election into the senate after the death of his elder brother, Senator Isiaka Adetunji Adeleke. Ogunbiyi’s decision, we exclusively gathered, was as a result of the peace meeting brokered by the party chieftains in the state between him and Senator Ademola Adeleke, who emerged the party’s flag bearer ahead of the September 22nd election. Ogunbiyi, we also gathered, has been agreed to be a consensus candidate of the Peoples Democratic Party (PDP) for the senatorial poll come 2019.

It would be recalled that Ogunbiyi had earlier petitioned the National Working Committee of PDP and the Gubernatorial Electoral Appeal Panel, through which he rejected results of the primaries. In the said petition, Ogunbiyi challenged conduct and outcome of the primaries and Adeleke’s eligibility to participate in the election in the first instance. Ogunbiyi argued that Adeleke failed to meet up with the requirements as established by section 11 (D) of the 1999 constitution of the Federal Republic of Nigeria (as amended). Having submitted a document purported to be a testimonial as evidence that he was educated up to Senior Secondary and other discrepancies in the certificate said to have been issued by the Principal of Muslim Grammar School, Ede, Mr. Khalid A. Abass. Ogunbiyi therefore requested to be declared the winner of the primary election.

It wasn’t only Ogunbiyi that was displeased about the outcome of the election and emergence of Adeleke as PDP’s candidate; two other members of the party in Osun instituted a court case against Adeleke, challenging his eligibility to participate in an election based on the certificate he presented until the case was thrown out last week. Justice Oladimeji of the Osun State High Court in Osogbo dismissed the case on the grounds that the plaintiffs, Rasheed Olabayo and Oluwaseun’s claims that Adeleke doesn’t possess school certificate cannot disqualify him from contesting the election because the constitution doesn’t state that a candidate for the office of the governor must possess a secondary school certificate. That the constitution only stipulated that the candidate must be educated up to secondary school level and that the plaintiffs also admitted that the Senator attended Ede Grammar School,

In fact, another aspirant who participated in the primaries, Chief Fatai Akinbade has since left the party to join ADC, where he has emerged the party’s governorship candidate. But as it is now, all other aspirants and the aggrieved party members have since been reconciled and all differences settled. This was made possible by the former Senate President, Senator David Mark’s led reconciliation committee with intervention of some key stakeholders in Osun PDP. The likes of the former National Deputy Chairman of the party, Alhaji Shuaib Oyedokun; a former Minister of Transport, Chief Ebenezer Babatope; Dr. Olu Alabi; former Deputy Governor in the state and ex-Defense Minister, Erelu Olusola Obada; Chief Layi Ogunrinade and others were all part of the Abuja meeting, where it was resolved for all parties to support Senator Demola Adeleke’s candidacy the party’s flag-bearer in the coming election.

At the meeting, Ogunbiyi was persuaded to give peace a chance and work with Adeleke for the success of the party in the September 22 guber election in Osun State. He was however, according to an inside source, promised some slots to compensate his efforts. Part of the slots said to have been conceded to Ogunbiyi we gathered, include that of the Osun West senatorial seat, the Deputy Governor (which is said to have been filled by the Adelekes) and some other appointments in the state’s formation.

Though Ogunbiyi has not made any official statement since this new development, but a source that is abreast with the happenings in Osun politics revealed to us that he (Ogunbiyi) has accepted to work with Senator Demola Adeleke for the interest of the party.

‘’I can tell you that Ogunbiyi is ready to work for the party and its candidate in order to win the coming election as a loyal party man, left to him he wouldn’t have taken any offer or appointment including that of his senatorial district slot but for the interest of those party loyalists who worked for him in his camp as an aspirant and who also want to run for the Federal or state assemblies; for them to have good representation in the party so that all their efforts will not be in vain. We all know that what Ogunbiyi wanted and still very kin about is to contribute to the development of his state, having made a great success of his private life as a businessman. He is one man who consults widely before taking any political decision and that is why some who felt he should have defected from the party are now disappointed. Ogunbiyi is not like that, he knows what he wants and he is not the type that will be jumping from one party to the other’’, the source said.

The big question now, however, is whether the agreement between the two parties could be maintained and the peace brokered be sustained before the September 22 governoship election in the state? As some political watchers in the state are of the opinion that, the promises from both parties are likely to fail due to personal interest. This, according to them, is manifesting already as the Deputy Governor slot said to be given to Ogunbiyi was filled by the Adelekes. This school of thought think that there may be more drama to unfold before the election, as Ogunbiyi is believed to be closer to them at the national level of PDP while the Adelekes are firmly in control at the state level. The issue of clash of interest cannot be ruled out.

Why Many Muslims Go To Mt. ARAFAT During ILEYA