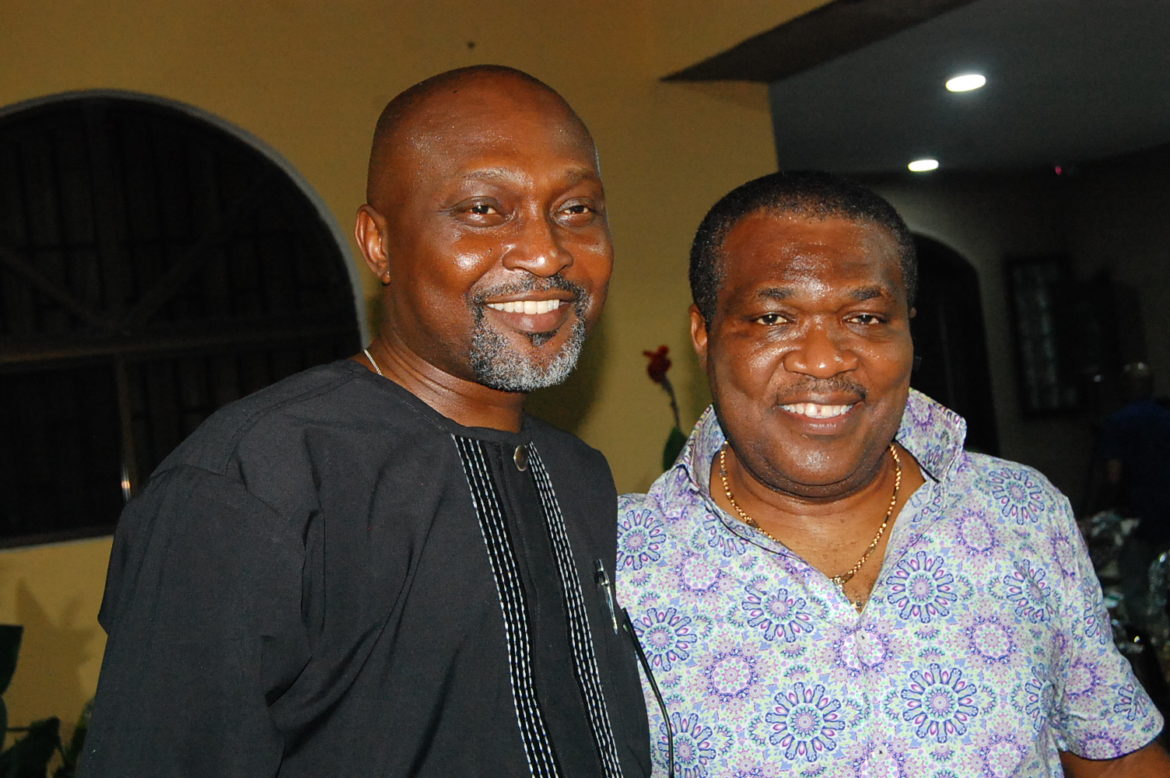 On the evening of Boxing Day, 26th December 2018, former Ogun State Commissioner for Industry, Otunba Bimbo Ashiru held his birthday at his Lagos home. It attended by most in society. A lot of corporate players attended, also many APC chieftains from both Ogun and Lagos State. Below are the blow gists from the classy party.

IT HAS BECOME AN ANNUAL EVENT

Every Boxing day, friends of Otunba Bimbo Ashiru usually gather at his Magodo home  in Lagos for his birthday. It has become like a ritual. And he has been hosting the party for over 10 years. It is usually a 2-in-1 party. It is meant to celebrate his wedding anniversary to Kemi (nee Adeyinka) and Bimbo’s birthday. Both Bimbo and Kemi are not only a happy couple, they are friends. Their kids played a key role in the success of the party.

One table that stood out districtly at the party was the one where all the Senators sat. There were many Senators in attendance drawn from Ogun and Lagos States. Senator Bareehu Gbenga Ashafa was there with his lovely wife, Senator Lanre Tejuoso, Senator Mamora came with his wife. Prince Senator Gbolahan Dada representing Ogun Central. Senator Gbenga Obadara.

OVATION Publisher, Dele Momodu was there. He came with his good friend, Rotimi Obey-Fabiyi, one of the sons of Evangelist Ebenezer Obey. His wife stepped in shortly after he left the party.

Anytime you see Yomi Badejo Okusanya at a party, he usually stands out, as a result of his unique agbada. He usually wears dansiki and kembe pants. His agbadas are richly embroidered. He came with his lovely wife.

Ogun APC governorship candidate, Prince Dapo Abiodun was at the party to honour Otunba Ashiru. They’ve come a long way. Both contested for governorship at the primaries and Dapo Abiodun emerged. Bimbo is part of Dapo Abiodun’s campaign team. He is the Director of Finance for the campaign.

Chief Seni Adetu, the former MD of Guinness Nigeria who is now into private business came with his wife, Jane who is an Etiquette expert. But he surprised everyone with his red Igbo cap which made him look like a red cap chief.

There are 2 society women who usually don’t miss the annual party of the Ashiru’s. They are Mrs. Mercy Adeyinka and Mrs. Nta Lijadu. Both have been friends for over 40 years. Mrs. Adeyinka is Bimbo Ashiru’s mother-in-law and Nta Lijadu is her best friend. So close are they that they attend parties together and wear similar outfits. But last week they wore separate outfit.

ALL THE BIG BOYS/BABES IN THE HOUSE

The party attracted the attendance of a lot of celebrity big boys and babes like Chief Jide Odekunle, who has been off the social scene for months. There was also John Olusegun Odubela (SAN) whose pretty daughter, Oluwatosin recently got married.

Airtel boss, Segun Ogunsanya and his lovely wife were there. There is usually no hiding space for Segun because he is tall. Once he steps into any party he is easily noticeable.

WHAT MADE THE PARTY STAND OUT

There are 3 things that usually make any party tick. One is good food. Two is good drinks and three is the right set of guests. Otunba Bimbo Ashiru’s party had a large dose of the 3. The food was handled by top Caterers and drinks flowed like water, be  it champagne, wine or liquor. That was why the party that kicked off at about 4pm went on till 12 midnight and all through, food and drinks flowed.

Give it to Mrs. Kemi Ashiru she is a perfect host. She is like her husband. Every 10 minutes she and her husband will move round, table by table, to ensure everyone had enough to drink and eat. She hosted a great party.

OGUN COMMISSIONERS RALLY ROUND HIM

There were a few Ogun Commissioners in attendance. These are some of Otunba Ashiru’s Colleagues in the cabinet before he resigned. There was Bimbo Akeredolu (SAN) for Attorney-General, Ogun State. There was also Mr. Bolaji Oyeleye, Commissioner for Environment.

That a lot of guests turned up shouldn’t come as a surprise. Everyone sees Otunba Bimbo Ashiru as a nice person, who is always willling to help all his friends. He has a way of bending backwards to accommodate everyones desire. And through that way he has touched lives. That was what made him go into politics, to enable hims, erve more people.