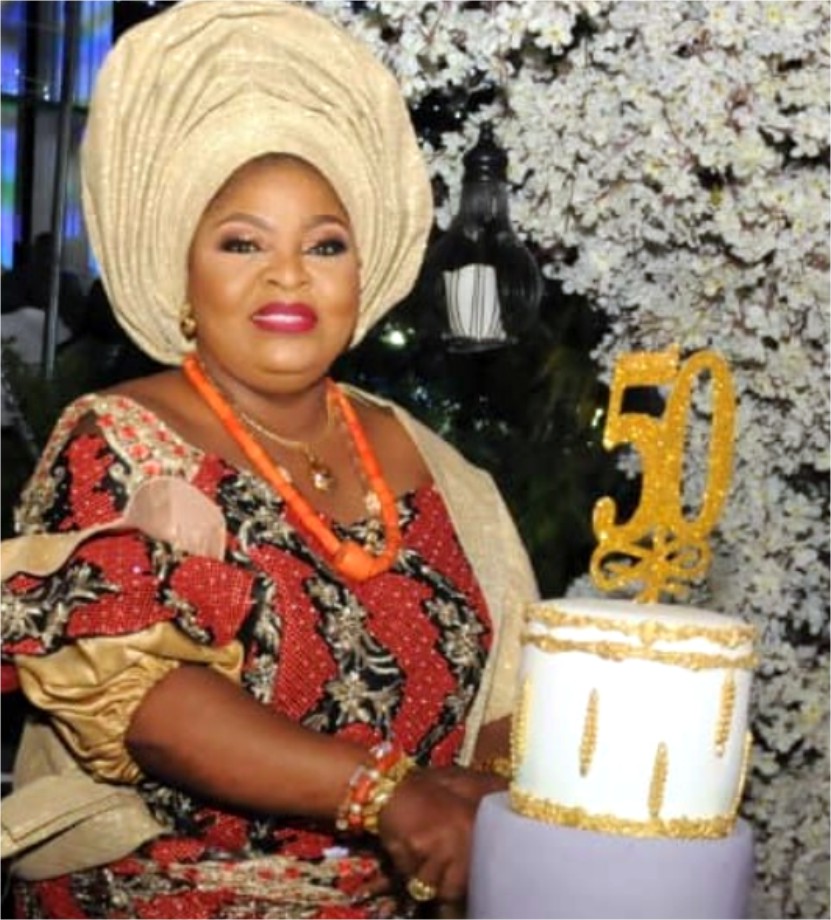 Details Of The Glamorous Party

It was a convergence of the who-is-who in Ibadan social establishment on Sunday 23rd February 2020, as the top businessman Otunba Yomi Olaitan throws a lavish 50th birthday bash for his lovely wife, Yeye Adedotun Bolanle Olaitan.

The party, which held inside their expansive Kolapo Ishola GRA mansion in Ibadan, was massive, glamorous and classy. It was an exclusive birthday gig for selected guests; a strictly by invitation affair. Everything one could have ever imagined of a mega party was available. The food, drinks, decoration and arrangements were just superb and of good quality and taste. There were all kinds of choice drinks; Hennessy both VSOP and XO, Moet, Black Label, Green Label just name it. They all flowed endlessly. Not to talk of the sumptuous foods on the menu list, both local and continental dishes. Chinese, Jollof and fried rice pounded yam, fish pepper soup and snail, eba and egusi Ijebu with stockfish, ikokore, asun, small chops, tilapia pepper soup and all were part of the menu.

What about the decoration? The garden and parking lot of the building was transformed into a small paradise with an elaborate decor with enough flowers and lights as well as matching table covers and props. There was also the red carpet section which was adorned by the celebrant’s large-format photograph. It was a lovely scene to behold. Nothing less is expected of YOMDEX, he has a standard of organising his parties and won’t compromise the standard for anything. City People’s Correspondent, DARE ADENIRAN, however, was at the classy and glamorous events and hereby presents to you all the tit-bits gist from the party. Enjoy it.

At 50, Chief (Mrs.) Adedotun Olaitan is a fulfilled woman in all ramifications. She has meritoriously served and retired as a television broadcaster. She is now a media consultant and runs an upscale boutique in town. Her marriage of over 3 decades to her better half, Otunba Yomi Olaitan, keeps blossoming year in year out. They are blessed with three lovely children; two boys and a girl. Together, they have built a strong and happy home over the years and their love for each other keeps waxing stronger and stronger. Evidence of which was displayed by the husband on her 50th birthday, as he showers her with much love and affection as usual. He splashes millions of naira to celebrate her special day and even bought her a brand new Toyota Venza and an expensive overseas birthday trip. Yeye Adedotun Olaitan is from Ijebu State while the husband comes from Ilesa Osun State.

She started her broadcasting career at the Nigerian Television Authority (NTA) as an intern and later moved to the Broadcasting Corporation of Oyo State (BCOS), Ibadan after NYSC, where she retired as a Chief Editor. She is also a former PRO of Oyo State Ministry of Commerce & Industry and late to the Oyo State’s Pilgrims Welfare Board (Christian Wing). She is also former media consultant to Obat Oil.

The most underrated gift in the world, according to the reverend father who coordinated the holy mass, is the gift of life. This, coupled with the Bible verse which says “so teach us to number our days, that we may apply our hearts unto wisdom”, Yeye Olaitan has identified accordingly and decided to celebrate her birthday with a special thanksgiving. At the St. Patrick Catholic Church, Basorun, Ibadan. The holy mass, officiated by 3 reverend fathers led by Very, Very Reverend Father Joachim Akee, was strictly family affairs with few friends present. Some of the very close friends and associates of. the Olaitans at the holy mass include Asipa Akinwale Sodipo and his beautiful wife; Dr. Akin Sodipo,the former President of Ibadan Recreation Club, Mr. Gboyega Fisher; D-Vine Ice boss, Mr. Kayode Oluwadare; Architect Kayode and Lanke Fakunle; Mrs. Kemi Ayelabola and family members on both sides.

The Olaitans sure know how to pull off a nice party devoid of stress. No wonder very few people were invited for the holy mass. There was a long space in-between the church programme and the reception, giving even those who attended the holy mass enough time to rest before coming for the evening party. The main party kicked off by 5pm and was organised in such a way that miscreants and unwanted guests were not giving any chance. There were hefty security men and beautifully-looking ladies at the gate checking and confirming the guest’s list. Once your name is not on the list, it means you were not invited. The process, no doubt, gave the party a good image and allowed all the invited guests enjoyed their time all through. It was a glamorous and colourful reception as guests merry and partied till the very late in the night.

There was a beautiful 2-step birthday cake (Gold, White and Light Blue) which completed the whole celebration. Also, Yeye Adedotun Olaitan was looking dashing in her expensive lace birthday dress (which comes in touch of red, gold and black and gold headgear). She had earlier rocked a White lace for the holy mass in the morning. It was a glamorous scene during cutting of the cake, where Oyo First Lady and some other dignitaries participated.

BETWEEN OYO FIRST LADY & THE OLAITANS

The beautiful and ever-smiling First Lady of Oyo State, Engr. (Mrs.) Tamunominini Makinde stole the show at the party. In her usual manner, she came to the party without any unnecessary noise. Her grand entrance was however noticed when she hit the red carpet for some photoshoots. For those who may not know, the Olaitans are very close to Gov. Makinde and his wife. They are family friends and that explained why she came to support Yeye Olaitan on her birthday. She even participated in the Purple Aso-Ebi. She looked astonishingly beautiful in her simple but nicely cut Iro and Blouse style. She spent some quality time at the party and enjoyed every moment of it.

The Olaitans are blessed with three wonderful children; two boys and a girl. The firstborn, Ajibola is a graduate of Economics and presently pursuing another degree in the U.K, he couldn’t make to the birthday celebration; Mojisola is the second and a final year Medicine and Surgery student of a frontline private University in Nigeria and last born Temitayo Junior too is almost through in the secondary school.The duo of Mojisola and Temmy really stood in for the brother and strongly supported their mum on her 50th birthday celebration. Moji came with her 5 friends, three of which are also medical students and would become doctors in four months time. They were the fulcrum of support all through and had to leave for school the next day in their blue scrubs uniform for doctors.

Otunba Yomi Olaitan is a super host any day anytime. He knows his onions when it comes to organising events. His expertise and experience as an event manager always reflect in his parties. His pre-inauguration party for the executive governor of Oyo State, Engr. Seyi Makinde last year is still very fresh in the minds of those who graced the special occasion. His wife’s 50th birthday party was not different, except for the fact that it was more elaborate. All to eat and to drink were made available. Apart from the availability of enough food, drinks and finger foods, YOMDEX made sure all guests were taken care of. As he moved from table to table.

POWERFUL BIG MEN IN THE HOUSE

WITH LOVE FROM ABROAD

There were some of Yeye Olaitan’s friends who came all the way from abroad. They include Mrs. Kemi Ayelabola who flew in from Dublin; Lola Shodipo from London, Odunayo Agoro from London and Tola Adefemi from Canada. They all came to support their friend, Yeye Olaitan.

AN ARRAY OF SOCIAL CLUBS

THE ROYAL FATHERS IN THE HOUSE

To show that YOMDEX is well-loved and respected both in his hometown and Ibadan where is he based, two royal fathers of Ijesa land were at the party. HRH Oba (Dr) Adetayo Haastrup, the Olumobi of Imobi-Ijese and his beautiful Olori came to support the Olaitans. So also is another traditional ruler of Odogbo-Ijesa, Dr. Olatunde Oginni (JP).

Trust YOMDEX, he doesn’t joke with quality. The best of the best event vendors were engaged for his party Dexterity handled the elaborated decoration while Jobol Catering Service provided the delicious food. Another top name in the industry took charge of Chinese food. Mr. Kayode Oluwadare’s D-Vine Ice did justice to the drinks aspect. A prominent band from Lagos, Q Band supplied the music, while Olubunmi Olabiyi of BCOS who also doubles as the celebrator’s friend and colleague anchored the whole events. They all did excellently well.

READ ALSO: WHY PRIMATE AYODELE INVITED ME TO HIS CHURCH – KWAM 1