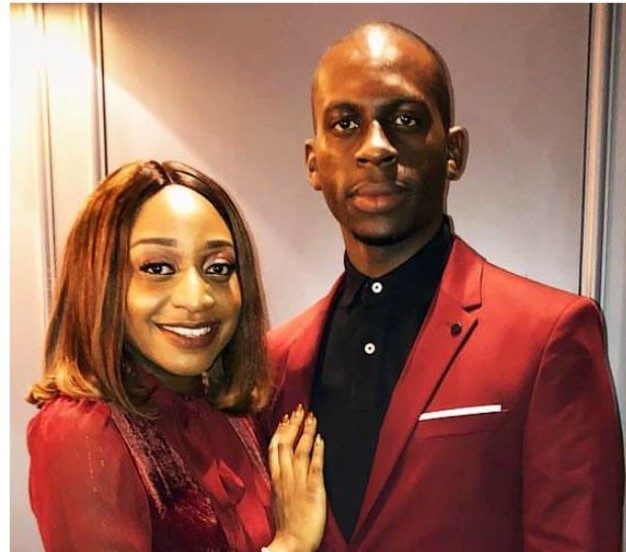 •In Their 70k Velvet Aso Ebi

Lagos was shut down Monday, April 22nd when the Doyen of Nigeria’ s society, Hajia Abba Folawiyo hosted family and friends to her granddaughter’s wedding in Lagos. It was a show of class, wealth and status as all routes that led to Victoria Island stood still for many hours. Many celebrity men and women trooped out and stormed the party to honour her. The bride of the day is the daughter of Segun Awolowo, the first grandchild of the late sage, Obafemi Awolowo. Not only was it the Folawiyos or Awowolos event, it was also for the Kayodes as well and you can only imagine what caliber of guests will attend such wedding. The couple’s mothers, Mrs Bola Awolowo who is from the illustrious Fowora family and late Mrs. Osayomwanbo Kayode who is from the prominent Giwa Osagie family also pulled a large crowd of celebrity women to the party. Hajia Abba Folawiyo’s granddaughter, Seun Awolowo got married in a spectacular wedding to late Olubode Kayode’s son, Akintoye.

The colours for the day were Purple and Teal. Almost all the celebrity women and ladies wore the Aso ebi which was sold for 70k. The aso ebi is very unique. It is a handcut velvet in colours of purple with full pearls on it  and it 3 types.The Aso ebi had to be ordered massively because of its demand hence the 3 types. They all paired their aso ebi with teal and purple basket aso oke from Abiola Aso Oke. It is one of the exclusive Swiss Velvet fabrics in town and this is the first wedding that it will be worn as aso ebi. The aso ebi was supplied by Hajia Abba Folwiyo’s niece. Give it to our society women, velvet is not for the faint hearted, it takes someone that is very stylish and fashionable to wear it well. This was what all the celebrity women wore and they added a lot of glamour to the party. Do we need to tell you about their accessories? yes!! Expensive pieces you must guess, some of them dazzled in diamonds while some settled for gold. Some also decided to pearl their outfit off. It was a showcase of fashion and style at the party.

The 2 colours did justice to guests outfit as it came out nice on everyone. Brides friends also dazzled in another set of colourful pewter and silver dresses. They all stunned in their different styles and with statement jewelries. It was indeed the couple’s day and every woman at the event scored a point. Leading the pack was the brides mother, Mrs Bola Awolowo and her mother inlaw, Hajia Abba Folawiyo. They were everyone’s delight at the party. They were the cynosure of all eyes as all guests keep staring at their ageless beauty. To say they are fashionable is simply stating the obvious. Anytime they step out at events, they are indeed a head turner. Mrs Bola Awolowo opted for a unique and expensive metallic gold coloured aso oke and later changed to a powdered/navy blue velvet lace, She matched it up with a sky blue sagoe headgear all stoned bluish green Sagoe headgear. Also the bride’s grandmother, Hajia Abba Folawiyo. She is your regular style dictator anytime. At well over 70, her fashion sense can’t be –emphasized, she wore an expensive purple aso oke at the engagement wedding and later changed to the velvet aso ebi at the reception. She opted for her usual Silhouette dress style which suited her tall frame and glammed up her outfit up with a gold jewelry.

Lagos celebrity woman, Olori Ladun Sijuwade, the pretty wife of late Ooni of Ife, Oba Sijuwade’s ever glowing wife with a beautiful figure. She wore the aso ebi as well and tied a very unique style with her headgear. Sighted also was Lagos society woman, Lara Ajanaku, she came without her best friend, Funmi Osunsade, the younger sister of Globacom boss, Otunba Mike Adenuga. We cannot forget APC women leader, south west, Chief Mrs Kemi Nelson, she is known for her unique style and headgear. She was well embraced at the party and exchanged pleasantries with many of her friends especially her sister, Mrs Biodun Laja. They sat together with one of her younger friends, Jibike Babatunde who also wore the aso ebi. Lagos fabric merchant, Barr. Sade Balogun was also with her retinue of friends, she was mostly in company of Mrs Biodun Laja. They sat together and remained inseparable till the end of the party. Mrs Sade Balogun too looked glam in the purple aso ebi with a massive coral gold jewelry.

What of Mama Bakassi? The ever gorgeous senator Florence Ita giwa is a stunner anytime. Her role was huge at the party, as Hajia Folawiyo had always played a motherly role in her life so also was she fully on ground all through and stood behind Sisi Abba. she was part of the VVIP on the high table. She sowed her aso ebi in a beautiful way and paired it with the teal and purple headgear. And we can’t forget our own style matriach, Hajia Bola Shagaya whose fashion style cannot but be noticed at parties, she loves diamonds and puts them on whenever she attends A class events. She looked beautiful in the purple aso ebi sewn into a blouse and wrapper and was seen with her friends on the same table. Same goes for Sade Okoya, the pretty wife of Eleganza Boss, Chief Rasak Okoya, she also wore the velvet purple aso ebi sewn into a dress and matched with a lovely white pearl. Wife of Lagos Doctor, prof Dapo Ashiru, Iyabo came in with her husband, she also wore the aso ebi. On the list are also other celebrity women who dazzled in their aso ebi. Sighted were Sena Anthony, Top Lagos Civil Servant, Chief Mrs Enitan Akerele had been in the social scene for decades and she loves to celebrate with most of her friends. She was at party looking regal in the purple aso ebi and headgear. The special adviser to president Buhari on diaspora, and inlaw to Ogun State Governor, Amosun, Hon. Abike Dabiri Erewa also showed up in her purple velvet aso ebi, she was seen in the company of her ever gorgeous friend, Hon Jumoke Okoya Thomas. Erelu Abiola Dosunmu went for her regular white outfit, Erelu Ireti Asemota dazzled in a purple aso ebi too.

The 3 Olori Tejuoshos, Omolara, Yetunde and Bisi also looked beautiful. We can’t forget Islar Animashaun, Chief Mrs. Bewaji Kuku, Wanda Ibru. The society has missed Alhaja Bintu Tinubu and everyone was happy to see her make her first social outing. She looked very calm and beautiful. Chief Mrs Bola Obasanjo too was not left out.

READ ALSO: HOW I STARTED HEALTHPLUS FROM A SMALL SHOP IN IKEJA – FOUNDER/CEO, BUKKY GEORGE, REVEALS HER 20 YR STORY