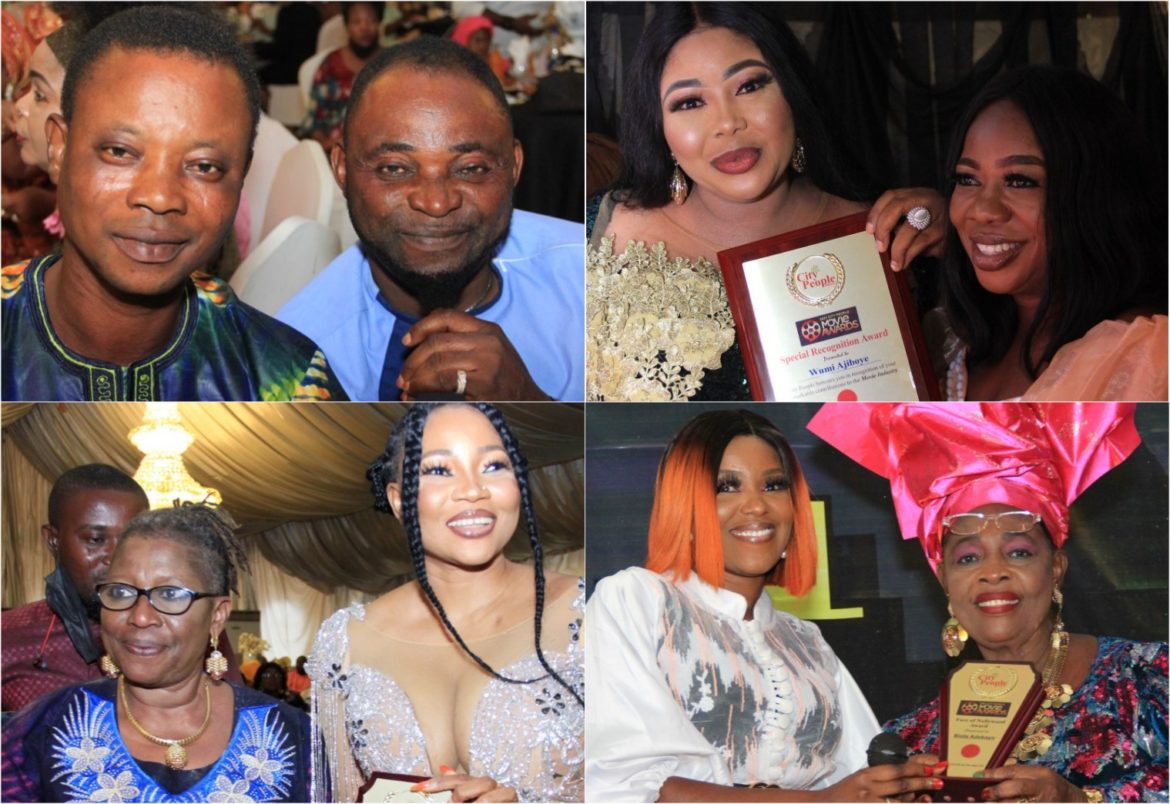 The city of Abeokuta witnessed an outstanding event on Sunday 29th August 2021, at the very prestigious Olusegun Obasanjo Presidential Library Event Centre. When City People honoured outstanding movie stars in English, Yoruba and Hausa categories, and also special recognition to pacesetters, pioneers and veterans in the industry who has contributed immensely to the growth and development of the entertainment industry in Nigeria.

The fast-rising and new stars were also recognised for their outstanding skills and talents in the industry. The recognition was also to encourage them to do more in the industry.

MC Jimi Taiwo was the official MC of the award while Alayo Melody was at the bandstand.

It was indeed an evening of glitz and glamour, as many stars and veterans looked their very best at the events. Over 300 stars stormed the event, also Kannywood flew in from the North to be part of the awards.

Lanre Adesina Hassan popularly known as Iya Awero a pioneer in the movie industry was among the veterans that were honoured with the Lifetime Achievement Awards. She stepped into the hall in the company of her sister in the same very expensive lace outfit, they could easily pass for a twin.

Also, veteran actress, Iya Ereko stormed the event in the company of lots of younger movie stars. She looked ageless as ever in gold lace. She was also honoured with a Lifetime Achievement Award and despite her age, she took it upon herself to show support to every other movie star that got an award by following them to the stage to get their award.

Star actor, Odunlade Adekola had to commend her for her love and support for the younger movie stars in the industry.

Also, Abiola Atanda popularly known as “Madam Kofi” who has been in the entertainment industry for over 5 decades was among the veterans that were honoured with the Lifetime Achievement Awards.

This very energetic and highly talented star, not just made it to the event early but was one of the side attractions at the award with her unique signature headgear. The multiple award-winning, Ayo Mogaji was not left out. She was awarded several recognitions for her exceptional contribution to the entertainment industry. She is one veteran that is known for interpreting roles so perfectly both in English and Yoruba movies and she has a good command of English.

Popular veteran actor, Ijayegbemi Monsurualso made it, and he was honoured with a special recognition award. One can’t talk about veterans who control the Ogun State Tampan Chapter and not mention the very brilliant Owolabi Ajasa. Though he is very simple in nature but commands a lot of respect in the industry.

Also, Rasaq Olayiwola, popularly known as Ojo Pagogo. His humility is second to known. Despite his success and achievement in the industry, he is very simple and humble, and this nature he displays everywhere he goes.

He was awarded Special Recognition Award and immediately after he got his award, he displayed some Ojopagogo traits on the stage to entertain his fans.

Yomi Fash Lanso is no doubt one of the very best filmmakers in the industry. He is multi-talented and highly respected. An actor, director, producer and content producer, who has produced a good number of movie stars today in the industry. He was also given Special Recognition Awards for his immense contribution to the movie industry.

He is a very outspoken and down to earth person and looked very simple in his outfit.

Bose Aregbesola is one of the beautiful actresses doing well in the industry and she looked gorgeous in her outfit.

Biola Adekunle is another beautiful actress, who doesn’t only feature in movies back to back but also produce. She looked very beautiful in her sexy white dress for the award.

Wasila Coded also made it to the award, and her gold beautiful dress looked very pretty on her.

Popular actor, Taiwo Oduala was awarded Special Recognition for his contribution to the growth of the Yoruba movie industry.

The very pretty Wunmi Ajiboye looked stunning in her black and gold outfit and she bagged Special Recognition Award and also collected the Movie Icon Award on behalf of her husband Segun Ogungbe. She came in the company of her cute kids.

Let’s not forget the delectable Princess Aderonke Fagboro, who came in, in company with lots of supporters.

Queen Blessing who looked stunning in a green long gown was also honoured with a Special Recognition Award, which she appreciated a lot.

Young and brilliant filmmakers like Joseph Adebola and Ifeoluwa Gbadegeshi were equally given Special Recognition, and they were both very excited that their efforts in the industry are recognised and appreciated.

Multiple award-winning actor, Odulade Adekola was definitely one of the side attractions at the award. Besides cracking guests and colleagues up big time. His series Saamu Alajo won Best Yoruba Series Of The Year and his entire cast and crew came in full force to get the award. They entertained the guests with their crafts. It was indeed a funfilled night.

The ever delectable, Jumoke Odetola who emerged Best Actress Of The Year (Yoruba category) was no doubt one of the best dressed at the event. She looked stunning in a very sexy gold short dress.

Beautiful and simple Bukola Kiitan won Fast Rising Actress Of The Year looked so classy in her outfit. The highly talented Olaide Almaroof emerged Fast-Rising Actor Of The Year. His appreciation speech on stage was something else. He is no doubt very talented.

The very simple but highly talented, Titi Jeje emerged as Best Movie Director Of The Year (Yoruba). He also looked simple and good in his white native attire. Award-winning talented comic actor, Wale Okunnu emerged Best Comic Actor Of The Year, and you need to see the crowd that accompany him to the stage. It shows how much he is loved in the industry.

The very beautiful and very talented Anike Ami Olaniyi emerged as the Revelation Of The Year. Then her speech was something else.

The award-winning filmmaker, Tosin Igho won Director Of The Year and his movie “Seven” emerged as Movie Of The Year (English category). He was represented by his team led by Isa Abubakar.

Stan Nze remains one of the most brilliant actors in the industry, who has featured in blockbuster movies back to back. He emerged English Actor Of The Year. He came in the company of his friends to get his awards.

Olumide Oworu is one of those exceptional role interpreters in the industry making waves. He emerged as the Best Supporting Actor Of The Year. Then the very delectable and beautiful Biola Adebayo emerged the face of Nollywood. It came as a shock to her. She is one actress that has paid her dues in the industry and is loved by all. So it is an honour well deserved.

The very talented Okey Jude bagged Fast Rising Actor Of The Year. He was looking very simple in his blue outfit.

Award-winning actor, Babaseun Faseru came in, in the company of his beautiful and very pleasant wife, who looked so good in a black outfit. He bagged Most Promising Actor Of The Year. This particular lady is no doubt going places in the movie industry. The women are indeed taking over Ololade Ebong is one filmmaker to watch out for. She keeps doing a big-time project every now and then.

She bagged Best New Producer Of The Year (English category). She came in, in the company of her support system, her husband to get her award.

Award-winning actor, Kolawole Ajeyemi who looked good in an all-white outfit also collected an award on behalf of his wife. Toyin Abraham as the Movie Icon Of The Year.

Beautiful actress, Esther Kalejaiye also made it to the event.

The delectable Moradeke Adeboyeja looked stunning as ever in the company of her friend in a black and gold beautiful outfit.

Ademola, Adetutu, Alatishe Adetutu, Onike Oki, all from Abeokuta Tampan for the award.

Adewale Adesina, Kehinde Ajibodu, Amosu Solomon, also made it to the awards.

While Pastor Abel Dada and Francis are both from Lagos to support one of their own in the industry.

Also Bukola Adewale, Olufunmi Solaja, Adebowale Kofo also made it to the award.

Popular comedians, MC Dotun Adejuwa, MC Floor, MC Jimmy Jairo all made it to the award.

How TOYIN & I Have Made Our Marriage Work – Husband, KOLAWOLE AJEYEMI